I was hoping to once again be surprised and delighted by Seattle Musical Theatre, whose building looks like a warehouse from the outside and feels intimate and friendly on the inside, but is capable of putting on high quality performances that belie its appearance. Not this time. This performance had so many problems that rather than being entertained by the inspirational story of how a chubby high school student achieving fame and success in integrating the Corny Collins Show, I found my attention diverted by the poor performances, which were numerous enough to produce unintentional comedy, instead of purposeful laughs from well delivered lines.

When I first entered the theatre I was surprised at the intricacy of the set. While the other Seattle Musical Theatre’s shows that I have seen have had simple, clean backgrounds. This set was a whimsical, colorful, and impressive collection of platforms, doors, curtain, sliding beds, and flipping walls. But the tech crew was not able to follow through at this higher level and the audience was left waiting while they stumbled through a clumsy scene change. That was only the tip of the iceberg when it comes to the technical issues in this play. Every light and sound clue was late and awkward so that actors were left singing and dancing in the dark and exiting under bright lights. Not to mention the fact that the mic system was atrocious. Tracy Turnblad, played by Kate Moyer, luckily was a belter and her amazing voice carried through the audience even after her microphone cut out. However, Kate’s positive attributes ended there. She stiffly turned to the audience and said each line in a mocking tone as if making fun of the script. When dancing in the chorus she fell far behind all others when her character was supposed to be outshining all her peers. 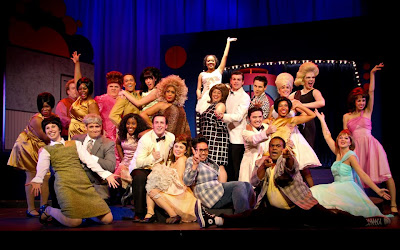 The cast of Hairspray at Seattle Musical Theatre. Photo by Jenni El Fattal.

Amber Von Tussel, whose character was supposed to be the least talented of them was one of the best dancers and actors present. Meanwhile, her mother blundered angrily around the stage, clearly the polar opposite of the talented, put-together Ms. Baltimore Crabs she was supposed to be. Her costar, Corny Collins, livens up the show with his energetic attitude and perfect singing, even though his dancing looked like a mental patient getting an electrical shock. But nothing was as disturbing as Colleen Gillon consistently ending her fun and dynamic characters with the line “I am so lonely” which immediately turned the audience’s chuckles into baffled silence. However, she was one of the better actors, and in general it was the smaller characters that shone - especially Michael Gibbs, whose producer, cop, and principal were simple but hilarious, and gave a reality check to the overdone characters and cheesy lines which dominated the stage.

There were some main characters that were able to pull it together. Lil’ Inez was an adorable bundle of talent who won the audience’s hearts. And her mother, Motormouth Maybelle somehow made her rhyming lines seem natural and had the crowd on its feet after her rousing ballad. This was not the only showstopper. The choreographer showed what he was capable of in the number ‘I Can Hear the Bells’ when Link Larkin was carried around like a life size Ken doll.

While this was one of the worst professional shows I have ever seen and a huge disappointment knowing what this theatre company is capable of, it was far from boring. However, if you come, make sure to “brace [yourself] for a whole lotta ugly comin' at you from a never ending parade of stupid.”