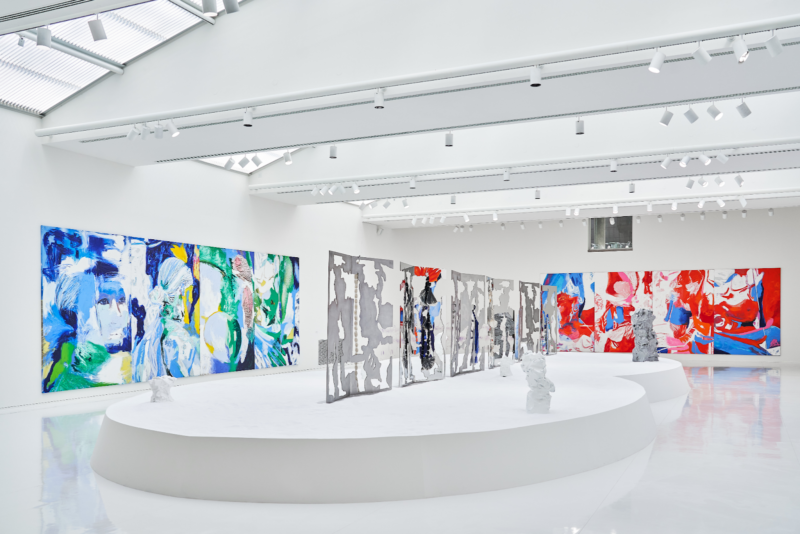 Equal parts enthralling and bewildering, your queries will spiral as you immerse yourself in Donna Huanca’s MAGMA SLIT. Transporting the viewer from the mundane reality of Seattle traffic and tedious routine, Huanca provides a reprieve from the ordinary, casting the viewer into a cathartic land of discovery. Residing in the Henry Art Gallery, MAGMA SLIT consists of four expansive paintings depicting each season, bringing life to their formerly inanimate white backdrop. These paintings emerged from an array of digitally printed photographs from Huanca’s life, which were stitched together and transformed into the paintings. Huanca coated these foundations with vivid strokes of paint, hues primarily corresponding with their associated seasons: warmer tones depicting summer, cooler ones characterizing winter, and a flurried blend of both expressing the transitory seasons of spring and fall. Echoed with hints of life, these paintings display glimpses of the photographs of people and natural textures concealed within them, providing a real life connection between the audience and Huanca’s abstract world.

In the middle of the exhibit lies a stage. Down the center, a line of six steel sheets with alternating reflective and opaque sides create a transcendent mirror effect. This allows you to simultaneously view slivers of the paintings behind you, before you, and even catch glimpses of yourself. Cast against the vibrant settings of the paintings, viewers are further immersed in Huanca’s surreal world by becoming part of it. This deepens the viewer’s connection with the exhibit through encouraging them to relate Huanca’s pieces to themselves. Donna Huanca, Installation view of Donna Huanca: MAGMA SLIT, 2022, Henry Art Gallery, University of Seattle, Washington. Photo: Jonathan Vanderweit courtesy of the Henry Art Gallery. 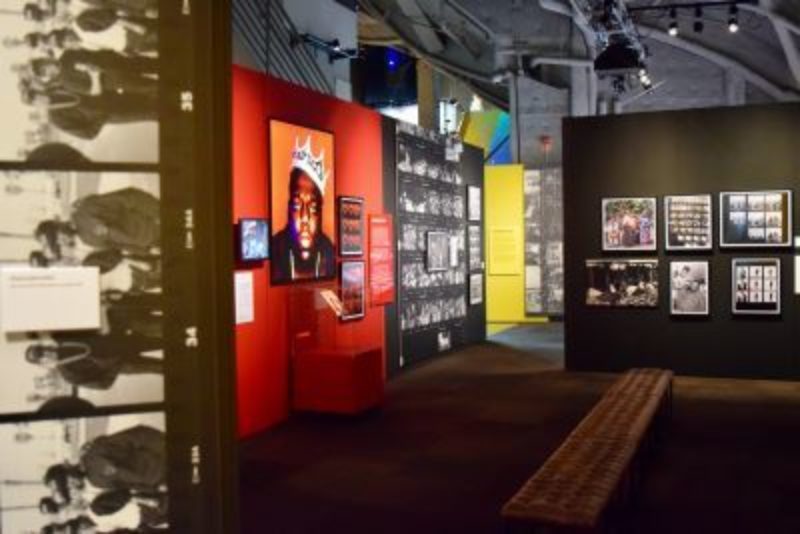 MoPOP, formerly known as The EMP, has always been the epicenter for all things pop culture, art, and music in Seattle and is constantly showcasing art in innovative ways. Contact High: A Visual History of Hip-Hop is no exception. This exhibit features four decades of hip-hop through film and digital photography, giving visitors a chance to know what photos didn’t make it onto classic album covers and magazine spreads while overall celebrating the culture and craft that is hip-hop.

Rickey Powell’s work welcomes me at the entrance, a magnificent glowing wall with some of Powell’s original slides from the 80s and 90s. Seeing familiar faces like rapper Chuck D of Public Enemy and TV host Oprah excited me for the work ahead. Throughout the first space of the exhibit, contact sheets (a preview of all the images on the roll of film), framed prints, and magazine spreads tell magnificent stories. It was at this moment that I understood “visual history” to be a completely accurate description of the exhibition.