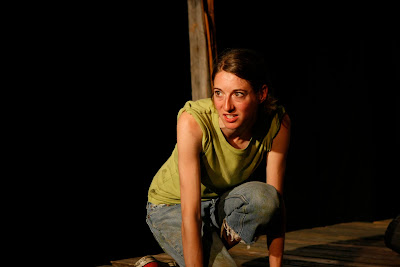 One of Renata's many faces in The K of D. Photo by Chris Bennion.
Q. Tell us a little about yourself and where you grew up
A. I was born in Montana, but moved to Port Townsend when I was 2, so did most of my growing up there. I'm currently based out of Seattle, after spending many years in New York full time and then several more years living a very bi-coastal existence.

Q. Your father owns a theater in Port Townsend, did this influence you to go into acting?
A. By the time he opened it, I already knew I wanted to be an actor, but growing up in a cinema certainly taught me a lot. I'd head down there after school and do my homework in the lobby, then spend the rest of the evening tearing tickets and watching movies. The 90's was such an incredible decade for independent film, and those were my formative middle and high school years. I remember being especially taken by the movies of Jim Jarmusch, Zhang Yimou, Robert Altman, Krzyzstof Kieslowski and the Coen brothers. I watched a whole lot of Rated-R art flicks when I was very much underage.

Q. You travel quite a bit between New York and Seattle, what differences do you see between the two theater scenes?
A. Size is one of the most fundamental differences. We have a couple dozen theatres/companies in Seattle, and New York has hundreds. Because of the abundance of theatre in NYC, it's more a part of the everyday--I know folks back east who see two or three plays a week. Seattle is actually full of actors who defected from New York at some point in their career looking for a better quality of life, and I think that's reflected in the warmth of the theatre community here. 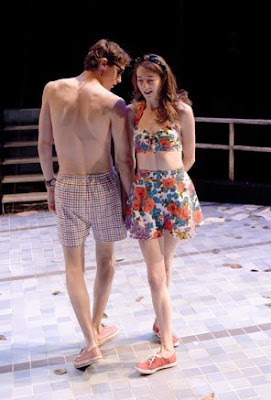 Trick Danneker as Orpheus and Renata Friedman as Eurydice in Eurydice at ACT Theatre. Photo by Chris Bennion.
Q.The K of D is premiering this weekend at the Rep and you are the entire cast! Tell us about The K of D and how you came to take it on.
A. The play centers around a young girl in rural Ohio who develops the Kiss of Death. I play a number of characters, including the girl's parents and a handful of teenagers who were there when she was struck with her mysterious power. I've been involved with the show since 2006 when I did a reading/workshop of it at ACT Theatre. A couple years later I decided to produce it myself in Seattle. I hired Braden Abraham as director, and he pulled together a great team of designers. After that show proved a success, we were accepted into the New York International Fringe Festival and later the Fringe Encores Series in 2009. The playwright, Laura Schellhardt, has been an unwavering supporter of our production, which has helped spur on its continuously evolving performance life.

Q. You acted in some wonderful pieces in 2010, where can we expect to find you next?
A. I'm actually considering a couple out of town possibilities at this point, but I can't say much more than that. The Seattle audition season is just about to start up for the Equity houses, so beginning in March I'll be going in for the next round of auditions for the 2011/12 line-up, which will determine my employment (or unemployment) in Seattle for the next year.

Q. Any bit of wisdom you've picked up out of all your years of acting?
A. I wish someone had warned me when I was younger that acting employment doesn't have all that much to do with talent. Booking a role comes down to timing, what you look like, who you know, your reputation, business savvy, and the director's mood on the day you read for them. It's important not to equate unemployment with lack of skill. Sometimes years of hard work and tenacity really do pay off, sometimes you get lucky quick, and sometimes it's an endless uphill battle. There's no formula. This profession is a huge gamble. 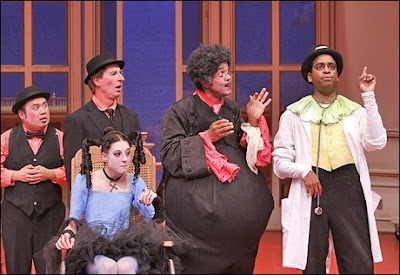 Don Darryl Rivera, Steven Epp, Renata , Allen Gilmore and Daniel Breaker in A Doctor in Spite of Himself at Intiman Theatre. Photo by Chris Bennion.
Q. When you are not rehearsing or performing what can you be found doing?
A. Practicing the ukelele. Reading. Cooking. Going to Elliot Bay Book Co. and staring at all the pretty books. Seeing all my dear and wonderful friends. Writing letters. Bike rides with my boyfriend. Figuring out what the next acting job's going to be.

Q. Are you a reader? What's your favorite book?
A. When I was a teenager, my favorite books were the Swallows and Amazons series by Arthur Ransom. I still reread those every few years.

Q. Leave us with some lyrics or quote that you like.
A. Um. I don't think any of my favorite quotes are appropriate to publish in this interview.

Thanks Renata! We think you're pretty much the greatest.