Review of H3 at On the Boards by Joshua G.

If you find yourself at On the Boards seeing a show called H3 be warned, it is REALLY for people who like modern dance.

The main issue throughout the performance was the Choreographer Bruno Beltrão’s insistence on using an “a sparse electronic soundtrack”.

Oftentimes, the performers were “dancing” to absolutely no music. Unless, one considers being forced to consider low street noises and screeching shoes a masterful mix-tape of mood enriching ambiance. 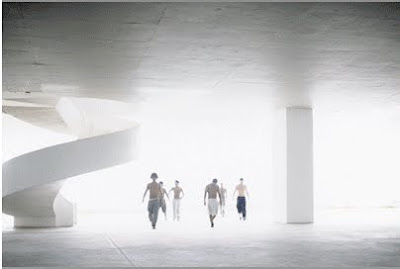 Things move very slowly in H3. I consider myself a respectful enjoyer of art in all its forms with dance being one of my favorites; I was looking forward to the show. But, if I am going to be led to believe that (according to the Seattle Times) H3 is “a new kind of a movement vocabulary in the making,” I do not think this new street dance vernacular wants to be taken seriously especially if one considers how valid I sometimes felt the cute nine year old's assessment of the performance really was. As he repeated to his mother, "Mommy, so can we go now?" I am doubtful that this is a new movement in the making.

It would be too harsh a word to describe H3 as boring; I just wish the presentation was more elaborate and engaging. Much of the performance was performed to naturalistic or ambient noise with little movement onstage. When things do get moving, I found many of the common movements repetitive. Take for example, the crutch of dancers constantly running backwards; Having the effect of taking something I thought was genuinely interesting and new, then turning it into a constant reminder of how wise it would be to check my watch.

That is not to say the performance did not show skill in its execution. There were moments of expert lighting and sections that were truly inventive. Such as using a single column of almost halogen-like lights to dramatically light up exactly half the stage, so dancers flipped and spun in and out of view between giant columns of light. Or the giant glow stick circle, all signs of H3’s fallen potential.

H3 is a frustrating experience. I can say with confidence that it truly is unlike anything I have seen on stage. It is much more difficult however, to say I truly had an enjoyable experience.