Review of Rimini Protokoll | BEST BEFORE at On the Boards by Monet C.

Starting with a solo guitar with a coffee house vibe, this play/video game soars after the first five minutes and continually amazes with the twists and turns of our choices. It is like nothing that I have ever seen before! The “script” is actually the people's real life stories. In the play, the people bare their hearts to the audience. 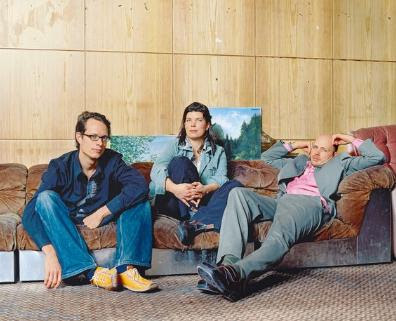 Rimini Protokoll
You play an avatar on the screen, and you can accumulate wealth, make choices about your health, and you end up wiser for the experience. There are life experiences in the game that you just might encounter in real life, such as the choice of taking drugs and living with the consequences, or leaving them alone.

I was honored to be able to interview the “cast” and, above all, the playwright!!!!

Stefan Kaegi, the playwright, is from Switzerland, and says that the idea came from another play, 100% Berlin. His favorite part of the play is what goes wrong, and the improv that comes out of it. He came to Vancouver, BC with an idea and wrote the rest through the life stories of his cast.

Brady is a hand programmer for computers, and of the play says that "it was 2 years in the making but most of the action happened in two months." She hand programmed the entire game and runs it on stage during the show.

Ellen joined the cast from a varied non-theatre background. She was a flagger for road construction and was recruited by the show to be a flagger.

Duff is a video game producer and says that he just kind of fell into the middle of the play. He thought a combination of video gaming and theatre sounded like fun.

Bob has been away from the acting scene for 50 years, but kind of acts as the show’s narrator. The ending of the show is his favorite.

Rimini Protokoll | BEST BEFORE
Through May 9th at On the Boards
Special offer for Teen Tix members: 2 for $10 advance tickets (no waiting until day of show!) for Saturday, May 8th at 2 pm. Call OtB's box office at 206-217-9888 to purchase.

*NOTE: Officially, On the Boards' programming is recommended for mature audiences ages 16 and up.