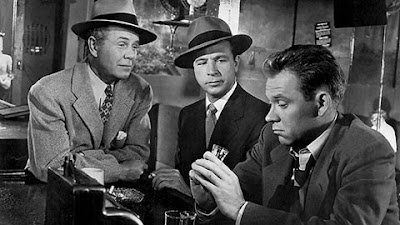 One of the most wicked and witty revenge yarns of the original film noir era. Until recently, theater's were screening star Dick Powell’s personal 16mm print as no 35mm copies existed. We’re thrilled to present this terrific film—Parrish’s debut as a director—in a brand new 35mm restoration courtesy of the Film Noir Foundation and the UCLA Film and Television Archive. Costarring ravishing Rhonda Fleming and the redoubtable Richard Erdman, one of the great wisecrackers of all time.
Saturday, February 20th @ 2:00 PM and 7:30 PM 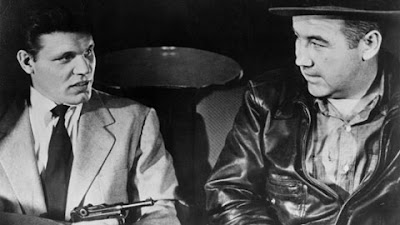 On the heels of their Cry Danger success, Bowers and Parrish were contracted by Columbia Pictures to craft a hard-hitting crime picture for Oscar-winner Broderick (Born Yesterday) Crawford. The tale of an undercover cop (Crawford) infiltrating a waterfront labor racket was a huge hit and a forerunner to 1950s crime exposés, subsequently overshadowed by the higher pedigreed On the Waterfront (1954). The Mob stands as a terrific film in its own right, featuring early work from actors Charles Bronson, Neville Brand, and Ernest Borgnine.
Saturday, February 20th @ 4:00 PM and 9:20 PM

NOTE: These films are not rated and may contain mature content, including sex and violence.