Review of Sense and Sensibility at Book-It Repertory Theatre by Allison C. 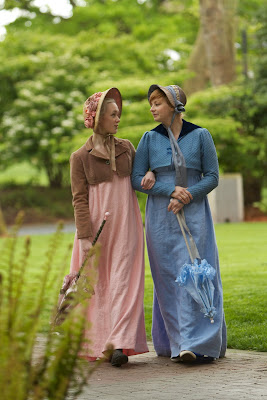 Photo by Alan Alabastro
We’re all hoping for a happy ending, and for most of us, that entails falling in love. Growing up, Disney, Pixar, ABC Family, and other media have drilled in our heads exactly what it is and how it will happen. We are fully prepared to step out of our humdrum lives into a world with dragons, castles, evil villains, and most importantly, valiant, noble men and women who are willing to risk their lives for us. Even 200 years ago, Jane Austen recognized that what we have in reality can be so much better than this fairytale. She saw men and women that gave up more than their lives for each other. They committed their whole self, their soul and heart. In Sense and Sensibility Austen takes care to illuminate those constantly overlooked relationships that, in their own way, are “true” love. She eliminates the sugar-coated idealized view of love, and with a practical, yet delicate and graceful approach, leads the reader into a time of strict and precise expectations when it came to finding love. 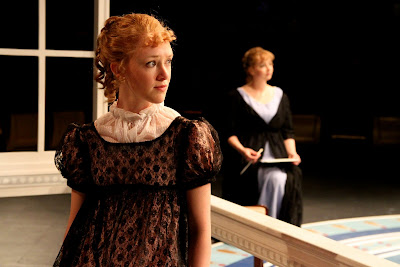 Photo by Alan Alabastro
In the on-stage production, Book-It Repertory Theatre introduces us to the Dashwood family, and especially, the two eldest daughters emerging into the rigid world of Regency England (early 1800s) courtship. Elinor and Marianne Dashwood represent two opposite outlooks on love. Elinor, played by Kjerstine Anderson, considered the “sense”, very practically looks for someone who is compatible and honorable. She is very concerned with properness of character and mutual affection. Jessica Martin, as Marianne, on the other hand, is concerned only with passion. She is the “sensibility” and the romantic. Her fantasized beliefs, especially that love is something that can only happen once, appall Elinor and set a much different tone for her relationships. Elinor is calm, calculated, and quiet, whereas Marianne is free, loud, and acts on her immediate emotions.

Book-It brings this to life with much ease. The combination of Austen’s genius, the cast's eloquent expression of her characters, and director Makaela Pollock’s quest to provide “modern energy” results in a timeless reflection on love. As this was my first Book-It production, I can’t say if it is just the usual, but the organization really brought the point home. While Sense and Sensibility has compelling dialogue just like other plays, the characters also recite direct, third-person lines straight from Austen’s pen. The effect can be funny, interesting, informative, and/or emotional. An author’s words shape the story, and including them in the play controls the viewers’ emotions much more precisely than a regular format would. The modern energy comes partly from these little side notes, which reveal the relatable attributes of each character’s personality. The rest of this energy is radiated from the actors. They take their emotions, sometimes confusingly hidden under complex speech, and show them to the audience clearly and in a way that reminds the viewer that though the times were different, the feelings where much the same. Sense and Sensibility leads us to love on two very different journeys. In a signature of Austen’s, Elinor and Marianne both face and learn from their flaws. Together they grow and learn. Their experiences, though from a completely different time, are still relevant today. As the audience, we can learn from them to shed our magical, dreamt-up ideas of love and embrace the sweetly simple reality that will hopefully find us one day too.