Review of Coriolanus at Seattle Shakespeare Company by Sandrine G. 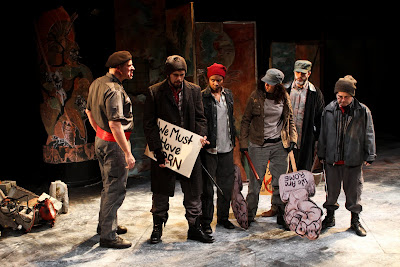 
Introduced by theater-movingly loud music and clad in piecemeal armor that lies somewhere on the badassery spectrum between LARPing and Mad Max, soldiers in Seattle Shakespeare Company’s Coriolanus exist only to be slaughtered by the title character (David Drummond) as he towers over them all by at least half a foot. The eponymous Roman warrior is first shown thriving in his element to later contrast with the trials he must face when thrust into the foreign world of politics. A scene-setting voiceover continues the non-Shakespearean introduction and further primes the audience for the iambic whirlwind to come.

Not that the action is hard to follow. As with any good interpretation, the actors flesh out Shakespeare’s pentameter with emotional relevance, helped along particularly well in this case by Carol Wolfe Clay's sets and Pete Rush's costumes. In this Coriolanus, the plebeians are the 99%, and their cry of WE MUST HAVE CORN takes shape on the illustrated fists of Occupy signs. Though there are many sad similarities between a stratified Rome, a feudal Britain, and an occupied Seattle in what has been called “Shakespeare’s most political play,” there are few answers to be had in the tragedy. As if to drive home this point, the set consists of beautiful fresco-like screens painted with confused images of gods and map coordinates that are pushed around the stage in multifarious configurations, used both to conceal and to emphasize movement throughout the play. 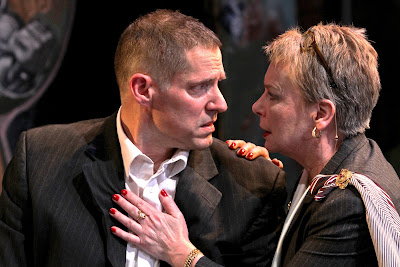 
A chillingly intimate counterpoint to the grand sweep of social revolt, some of the most powerful scenes show Therese Diekhans’ portrayal of Coriolanus’ steely mother and her interaction with the soldier’s son (Jack Taylor). Through their scenes, the audience is afforded an opportunity to glimpse the making of a warrior. Shakespeare’s characteristic comic relief, however, overshadows the terror and disorder of war. Whenever Joseph P. McCarthy’s First Citizen shows up in various everyman roles, the laughter of the audience is greater than the tears of the characters following Rome’s missteps.

Seattle Shakespeare’s Coriolanus is a work deeply rooted in conflict; it is at once a glorification of war and recognition of the personal sacrifices of public service, a portrait of an upstanding soldier and an exposé of the government he stands to protect, a primal tragedy of one man’s failure and a darkly humorous tale with universal wit. Perhaps such tale of political downfall is not the most auspicious for newly-confirmed Artistic Director George Mount, but the timing of his company’s revival of Coriolanus couldn’t be better for this crucial election year. And the attention placed on the importance of nurture to produce nature in the next generation of warriors, voters, and protesters is the most relevant point of all.