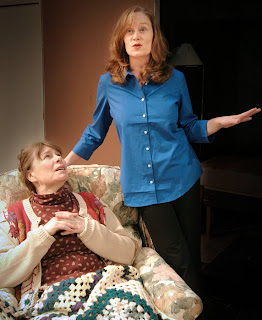 A review of the play WELL
at ArtsWest
By Alethea H, age 17

As people in a very impressionable society, do we go out of our way to accept people and their differences? Well by Lisa Kron does not shy away from asking tough questions like this one and many more. Set in a mid-western town dealing with issues of breaking down racial barriers and a family dealing with their depleted health, this play explores family and social dynamics by enveloping the viewer in a classic mother-daughter relationship.

Kate Witt as Lisa Kron and Therese Diekhans as Lisa’s mother, Ann Kron, give superb performances as they truly take on their character’s viewpoint of the world and how life works. The playwright addresses the issues of health and racial integration through reenactments of Lisa’s childhood and young adult life. The play commences with the understanding that Lisa is writing a play right in front of the audience. The stage is set with Ann reclining in a chair in the family’s living room. As the play begins, the audience learns of Ann’s serious hypochondriac issues with allergies. Ann has struggled throughout her life with being well enough to function on a day to day basis. One later learns, that Ann did manage to fight off her deteriorating health long enough to accomplish something that made a difference in the world. She had a major role in organizing the ‘association’ in her neighborhood which is an activist group to further amalgamate different ethnicities within her community. Ann is whole-heartedly devoted to honoring other people’s differences. She is so passionate about diversity that she decided to raise her children in a racially mixed neighborhood. Lisa and her brother were not only the only Caucasian people in their school, but they also were the only Jewish people. Lisa is taught to have a unique and individual personality through her mother’s work.

The play is also about Lisa’s own run in with allergies. At one point in Lisa’s college career, Lisa enters an allergy clinic. There the audience meets some interesting characters played by Terra Joy Jones, Frank Lawler, April Wolfe, and Bob Williams. In the allergy clinic, the actors have allergies to practically everything. The audience watches with amusement as the people on stage have odd reactions to different foods or inhalants. Near the end of the play, the crowd realizes that Lisa succeeds in getting over her allergies while Ann can’t seem to shake it off. This is a serious stumbling block for Lisa and is eventually addressed at the end of the play.

Well is an astoundingly well-written play that makes fun of situations in everyday life. In many ways, people from every age group and every walk of life can identify with something or someone from Well. Not only is it relatable to its viewers, but it also captures people’s attention. To understand this play one has to be on their toes at all times because the plot changes quickly and surprises are around every corner. One thing that playwright Lisa Kron did to even further captivate audiences is to write the play with audience and cast member interaction. Personally, it is very entertaining to see the actors get on the same level as the crowd. The bluk of the play consists of a conversation between Lisa and the audience. For example, Lisa will complain about her mother to the audience while her mother tells Lisa to be polite and offer the entire crowd something to drink. From this connection that the actors make with the audience, one can better understand Lisa’s thought processes and experiences. The play feels as though the audience members are guests at someone’s house. Well is an exquisite and unique play in that it challenges the normal boundaries of playwriting.

The theme of this play is also one that leaves an impression on people and it is one that they can take to heart. In the end, acceptance of people for who they are and acceptance of life’s tough situations is the bow on the package that tied this piece of drama into living, breathing excellence. Throughout the play, we see Ann’s role in breaking down racial prejudices and her goal to see the good side of every person. The audience also sees Lisa’s struggle to wrestle the hardships throughout her life. When Lisa reveals intimate details of her life and has a heartfelt conversation with her mom she learns an important lesson that can change lives. That lesson is of love and to accept each and every situation in our lives no matter how big or small. Simply put, Well is an unbelievably funny play with a touching message.

But the play does have one downfall. Without understanding the fact that this play is a play within a play, one will be confused for around a fourth of the performance. Now don’t hold that against them because once one understands this, this element of the play actually enhances the quality of the viewer’s experience. It adds an interesting perspective that no play dares to go. It gives an individual more respect towards the actors and the playwright. It also allows an individual to connect with the actors as actors AND characters instead of just their characters. It also gives the actors a chance to tackle more than one role which shows off their skills.

Overall, Well is a smash-hit with the audience. It is an interestingly crafted script and well worth anyone’s time. It broadens its doors to difficult questions in life and has everyone laughing from the time the play starts to the very end. It explores relationships between family and friends and teaches one the value of diversity. This play has many layers for a viewer to peel back, so get up and go see if you can discover what happens when diversity is challenged in Well.


Well plays at ArtsWest in West Seattle, now through February 15th
Visit www.artwest.org or call 206.938.0963
for information and tickets

photo credit: Therese Diekhans as Ann and Kate Witt as Lisa in WELL
at ArtsWest. Photo by Matthew Durham.