Review of Wittenberg at Seattle Shakespeare Company by Lauren W.

It’s like the start of a joke told by your professor. “So Martin Luther, Faust, and Hamlet all walk into a bar…” Except it’s not a joke—it’s the premise for Wittenberg, David Davalos’s brainy “what-if” comedy, brought to the Center House stage by Seattle Shakespeare Company. Billed as “hyper-literate,” the show is stuffed with gleeful geekiness, a playground for Davalos’s obvious love for humanities class. Any student will get a kick out of the intellectual engagement on display here; it’s like a manic lecture from your favorite snarky English teacher brought to life. 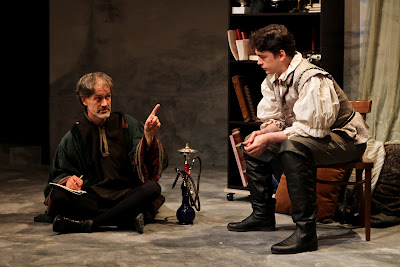 Chad Kelderman as Faustus and Connor Toms as Hamlet. Photo by John Ulman

In case you’re not up to speed, here are the players, in sum: Martin Luther, kick-starter of the Reformation of the church, hasn’t gotten around to any reforming yet. At the moment, he’s a monk with a day job teaching theology at Wittenberg College. Doctor Faustus, of German folk-tale soul-selling fame, is a doctor of philosophy and medicine, who loves asking the questions but doesn’t seem to have many answers. Then, of course, there is Hamlet, that angsty Prince of Denmark, who has been having some troubling nightmares. Unsure of his direction, Hamlet seeks counsel from his two most respected professors, Luther and Faustus. What follows is a hilarious and surprisingly passionate battle between two ways of seeing the world: faith and reason.

Though the play is presumably about Hamlet, the real thrust of the action is the friendship and rivalry of Luther and Faust; Hamlet is, for the most part, merely caught between them. Where Hamlet’s lines are joke-packed but prim iambic pentameter, Luther and Faust speak in spiky, crude, and smart modern speech. Davalos has written the scenes with the rivalry in mind; we see the sparks of ideas flying in dueling lectures, competing advice, and acid-tongued bar conversations. But behind all this lies a true friendship and concern for the other, which lends soulfulness to a production that could easily turn cold. 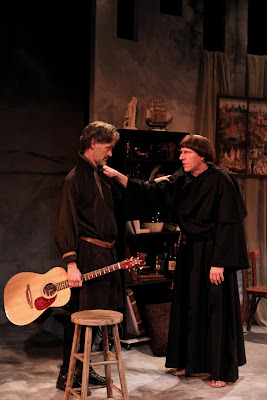 The play might trip over its own cleverness if it weren’t for the fully committed performances of its actors. They are never merely reciting banter—they are clearly motivated by strong needs and desires. Michael Patten shows real conviction as Luther, pious but not afraid to come down to earth when he needs to do battle on Faust’s level. Chad Kelderman’s winking Faust is a treat; Kelderman shows us a man who must mask his growing melancholy and doubt in a shroud of wit and playfulness. Connor Toms’s Hamlet is delightful, bounding with energy and wide-eyed enthusiasm, but effectively communicating the anguish of doubt and will plague Hamlet through the course of his next story. Michelle Chiachiere handles her four parts with grace and charm, moving these plagued men into action.

Get yourself to Wittenberg. Though the plot elements never fully converge into a cohesive tale, the level of discourse happening on stage is sure to get your brain firing. The cast is on-point, the direction is stellar, and the script is one you’ll end up wishing you wrote instead of passing notes during Western Civ.