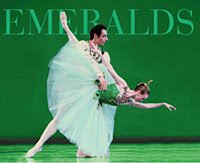 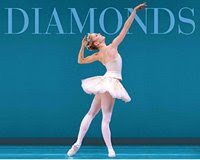 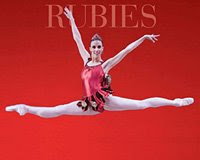 A Review of Jewels
at Pacific Northwest Ballet
by Mykhanh P.


I don’t consider myself to be an expert on ballet, but there is something about it that inspires a sense of wonder. Maybe it’s the way the ballerinas float and twirl across the stage, their fluid movements creating graceful pictures that little girls dream of being a part of. It is this spirit that the legendary choreographer George Balanchine, who is like the Steven Sondheim of ballet, has captured in Jewels, the first full-length, plotless ballet. Its three acts are named different jewels and emulate a certain style and mood. And while the fact that there is no story to go along with the dance may put off some people, it forces you to focus solely on the ballerinas and their dancing, becoming a pure embodiment of what the music is portraying.

The first and longest act, Emeralds, is supposed to signify Paris and the French Romantic-era ballerinas with its grand, sweeping score by Gabriel Fauré and the ballerinas’ long, calf-length skirts. There are a lot more attitudes (posing) and lifts than there are leaps or spins, and your eye is often drawn to the ballerinas’ elaborate arm gestures. It really emphasized to me that a dancer dances with their whole body at all times, not just with a couple of limbs, and something as small as a twitch of a finger matters. However, this was my least favorite, probably because it was the longest and because it just didn’t have the same sense of excitement as the other two; there was a quieter energy about it, and while it was still elegant and pretty, it didn’t appeal to me as much.

The next act, Rubies stood for America, and in true American spirit, Balanchine choreographed moves that I’m sure had never been seen or done on pointe. With a jazzy, piano driven score by Igor Stravinsky, the dancers kept everyone on the edge of their seats from the very first hip thrust done in line formation; it was America at its loudest, showiest, and most fun. The costumes had short, flapper-like fringes that swayed as the ballerinas sassily did high kicks, flexed their feet and bent their knees as they jogged around the stage. It was very Broadway style dancing, and if Chicago was ever turned into a ballet, this would be it – even jazz hands wouldn’t seem out of place. It’s not very surprising that Balanchine had in fact choreographed for Broadway. The unexpectedly bold and tongue-in-cheek movements kept the audience constantly amused and giggling, and I’m sure it was a favorite for many judging by the applause at the end.

For his last piece, Balanchine returned to a more classical style of ballet to pay tribute to his hometown of St. Petersburg and its famous Imperial Ballet. It was my personal favorite, set to the music of Peter Ilyich Tchaikovsky, and the main duet with the principle couple made me think of Cinderella and Prince Charming dancing at the Ball. The full ballet corps came onstage to dance with the couple and was so strong and clean, they really showed why PNB is a premier ballet company. It was what you would think of when you heard the word ballet, and you could feel the joy that the ballerinas were dancing with. It was a great experience, and I know the audience agreed.