Review of A Doctor in Spite of Himself at Intiman Theatre by Ehrik A.

Laughter is the best medicine and A Doctor in Spite of Himself prescribes enough laughter to keep you healthy for a very long time. A retelling of the original play by the French playwright (and satirist), Molière, the Intiman’s Doctor avoids the temptation of indulging in satirizing the problems and debates of today’s healthcare system. Instead, co-adaptors Christopher Bayes and Steven Epp focus their efforts on creating what an audience comes to a comedy for in the first place: laughter. 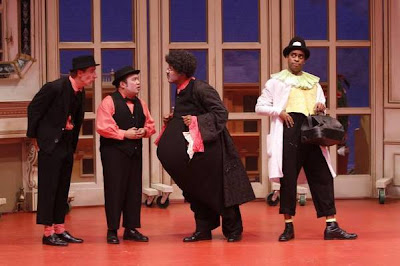 Steven Epp, Don Darryl Rivera, Allen Gilmore and Daniel Breaker in A Doctor in Spite of Himself at Intiman Theatre
Photo by Chris Bennion
A brief outline of the plot is as follows: Sgnarelle, an alcoholic woodcutter, has a fight with his wife, Martine. In revenge, Martine convinces two servants, Lucas and Valere, that her husband is a brilliant doctor-genius who can cure any ailment known to man. Luckily for the servants, their master’s daughter has mysteriously become mute after her father forbade her from marrying the love of her life, Leandre. Sgnarelle subsequently finds himself carried off to the master’s house to cure his daughter. And the rest is pure comedy.

Immediately, you realize what your ticket has bought you when the play opens with an ABBA reference that has Sgnarelle dancing around a Punch-and-Judy puppet booth that is as random as it is hilarious. The play is riddled with these types of non-sequiturs and pop-culture references that make it a brilliant and unique amalgam of traditional Italian commedia dell’arte and modern comedy.

The cast is keen to highlight this, as the actors each appropriately give excellent over-the-top performances that even leave each other breaking character and cracking up at the funniest points in the play. Particularly noteworthy is the cast’s leader, Seattle debutant Daniel Breaker, who I recently came to be familiar with through his Tony-nominated performance in Passing Strange. His Sgnarelle perfectly executes both sidesplitting deadpan and riotous slapstick. Think: “Old Spice guy meets SpongeBob.” 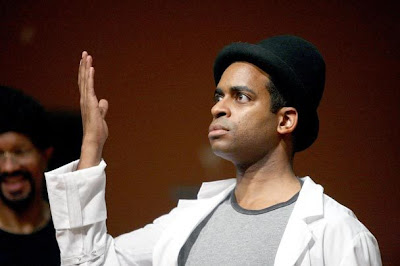 Daniel Breaker
Photo by Mark Harrison/Seattle Times
The last thing I’d like to note in the play is the music, whose presence likens it to being a character all on its own. Often times you’ll find a well-timed drumbeat or a carnival-esque chord from the accordion serving as the punch line to a well-punctuated joke.

Laughter creates a sense of escape from all the bad parts of life: the real problems, the real conflicts, the breakups, the tests, the college apps… And that’s just what this play brings: a coruscating silver lining to the dimness of the real world. Kind of like the ice cream you get after a tonsillectomy or wisdom tooth extraction. What A Doctor in Spite of Himself boils down to is an hour and a half of laughter and enjoyment. The jokes are so fast (maybe a bit too fast) and plentiful that I honestly don’t believe that there was any point in the play the audience was silent. The energy that this show’s writing, set, costumes, cast, and audience brings to the stage is a warm reminder of why you come to the theatre in the first place. Be sure to bring your friends.