Review of Sherlock Holmes and the Case of the Christmas Carol at Taproot Theatre by Emma M. 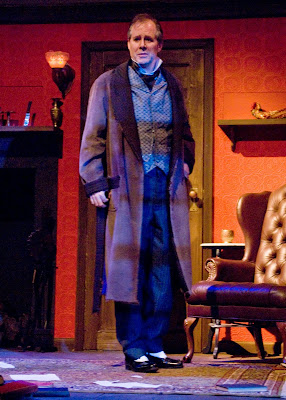 Terry Edward Moore as Holmes. Photo by Erik Stuhaug.
If you celebrate the Christmas holiday, then at one time you have probably seen, read, or heard A Christmas Carol, the classic holiday story by Charles Dickens. If you don’t know it, the five minute version would go something like this: Scrooge the miser is visited by three ghosts and learns the true meaning of Christmas, “God bless us everyone!”, the end. Over the years, many literary icons have taken on this story. The Muppets, Mickey Mouse, Bugs Bunny, Mister Magoo, and countless others have told the classic tale. And now it is Sherlock Holmes’ turn.

Sherlock Holmes and the Case of the Christmas Carol, written by local playwright John Longenbaugh, is a mash-up of two of the greatest literary curmudgeons in history, Sherlock Holmes and Ebenezer Scrooge. The story starts after Holmes has fallen to his death at Reichenbach Falls and returned, only to become more anti-social than ever, much to the chagrin of his friends. Then he is visited by three ghosts and learns to give of himself more. Don’t be bamboozled, this show is first and foremost A Christmas Carol. The great detective does hardly any sleuthing during the course of the show. 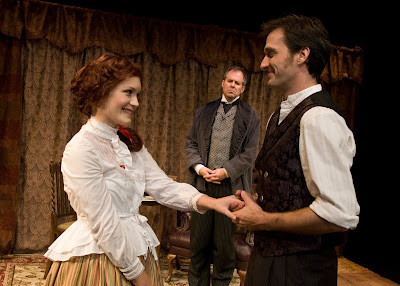 Jesse Notehelfer, Terry Edward Moore, and Aaron Lamb. Photo by Erik Stuhaug.
The play, a world premiere, is very cleverly written. For example in the scene where Holmes meets the ghost of Moriarty (his version of Jacob Marley), he goes through the logical steps to determine that he really is a ghost, which culminates in Holmes taking out a revolver and shooting him. In moments like this, Longenbaugh really captures the true Holmes character as he is portrayed in the books by Sir Arthur Conan-Doyle, making the script truly enjoyable.

There is always room for improvement. Some of Longenbaugh’s Christmas Carol references are a bit too much, such as Watson’s uncle-in-law, whose name is Tim and who walks with a cane. Tim tells Watson that his father had a wicked miserly employer once, who ultimately became like a second father to Tim after a Christmas Eve of reflection. Also there is a scene in Holmes’ past where he is in love with a young woman, but doesn’t pursue the relationship, and the older Holmes viewing his past regrets it. This scene was another parallel to A Christmas Carol’s story, but it felt really out of place in the play. As well, director Scott Nolte’s staging was at times difficult. Since we visit so many places in Holmes’ past, present, and future, we the audience need some sort of clue to help us know where we are. The stage is set minimally, with the exception of 221b Baker Street, and at times there aren’t enough visual or audio clues to help us understand where and when we are in the story.

Holmes, as played by Terry Edward Moore, is great. Moore essentially plays two of the most iconic literary characters of all time, Holmes and Scrooge, and portrays them both with grace. His grumbling gruffness and his sharp exasperation mesh together to form an engaging version of the great detective. Other notable performances are those of Aaron Lamb as Young Holmes, and Eric Riedmann as Garrison. They bring a really wonderful youthful energy to the stage, making it a pleasure to watch their scenes.

Holmes says to Watson at the end of one of his cases, “Draw your chair up and hand me my violin, for the only problem we have still to solve is how to while away these bleak autumnal evenings.” If you’re looking for a clever little spin on a Christmas classic, Sherlock Holmes and the Case of the Christmas Carol is a great way to while away one of your “bleak autumnal evenings.”