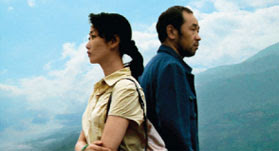 A review of Still Life, at SIFF Cinema
By Michelle K, age 17

Still Life, a story of a reuniting pair, brings curiosity to the travels of a man in an otherwise banal position. Residing in China, the main character, Han Sanming, returns to his decimated city after a massive flood took place along the Yangtze River. He is on a quest to relocate his wife (Missy Ma); they became departed after the flood took place. In this same plotline, we become acquainted with Han’s wife and follow a similar search for her husband. In a turn of events, the past lovers are placed in each other’s presence and must make peace with their current situations.

Jia Zhangke, the producer of this film, holds a distinct style. He has made sure to present the film in a purely chronological order, and illustrates the life of each character in a way that is only impressive in its reality. Zhangke assures a strict hold on his aspect of Chinese culture through film for the viewer with constant pans of countryside and a journey that is never narrated, and continually authentic in its presentation. Wherever the film takes you, it feels as if you have a view of the adventure first-hand; you are sitting on a boat with villagers and witnessing them laugh with children, you can smell the aroma of noodles cooking on the stove.

This film proves to be a masterpiece not for its edgy technologic features or heart thumping adventure, but for its true symbiosis with life as we know it. It purveys a deeper meaning than a simple for search for kin, but rather the meaning of hope and desire to do so. The true love that binds people together, no matter the circumstance, become apparent in this feature and is proven with the characters’ persistence in pursuing this instinctual need.

Still Life is no longer playing at SIFF Cinema, but check out their website for their latest features, including a week long series centered on the theme of Halloween.
www.siff.net