Review of youssou n'dour: i bring what i love by Molly L

It seems to me that many Americans are uninformed about what it means to be Muslim. In my World History class, we’re learning about the beginnings of Islam, but watching historical documentaries and reading text books can’t tell you everything. When I saw the film, i bring what i love, I was expecting a story about the making of Senegalese pop star Youssou N’dour’s album Egypt. What I got instead was an insight into what it really means to be a Muslim today. Youssou has always included messages about social justice in his music, but Egypt is the only one of his albums about his faith. 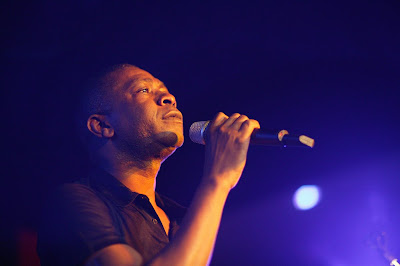 Usually, people don’t associate Islam and music, but they are both huge parts of Youssou’s life and he couldn’t have on without the other. That’s why he chose to make Egypt, bringing together two things that he loves. He believes in moving forward, to a “New Africa,” and this is one step in bringing about change, exposing his faith to the world. Youssou says that the West needs to learn that “Africa is not just about poverty.” He is looking towards advancing and says that “the diversity… [of Africa] is not an obstacle, but a richness.”

This film documents some of the diverse cultures of Africa and gives the viewer a picture of being a Muslim in Africa. Youssou, along with hundreds of men, women, and children gather together on the day of the Tabaski, facing the city of Mecca. They kneel together, pressing their foreheads to the rugs under them in unified reverence of Allah. Then they rise, although not at all at once. When everyone is standing wearing their finest bright clothes, the prayer begins again, foreheads to the ground. Such a spectacle is incredible, the unity of the group and their common purpose. Festivals such as Ramadan and the Tabaski, commemorating the Prophet Abraham’s sacrifice to God, are very important to Muslims everywhere. Even on tour, Youssou and his band use a compass to find the direction of Mecca so they can say their prayers in that direction five times a day.

Egypt, which contains songs about the prophets of Sufi (a branch of Islam), was not welcomed in Youssou’s home country of Senegal because of the religious content. In fact, many vendors refused to sell it because of the controversy surrounding it. They thought it was improper for Youssou to sing about Muslim subjects and about God for other people. Elsewhere, it was widely welcomed because of its insight into Islam, and its haunting traditional melodies. The film has so many qualities: beautiful music, insight into a very private religion, and it perfectly accomplishes what Youssou had intended to do, share his faith with people around the world.