Review of The King's Proposal at Seattle Musical Theatre by Rachel T.

Do you enjoy laughing until tears come to your eyes? Does the thought of Monty Python and Shakespeare thrown in a blender appeal to you? Do wittily worded silly songs about being lost “not physically, but emotionally” and fairy tale creatures “getting freaky” entice you? 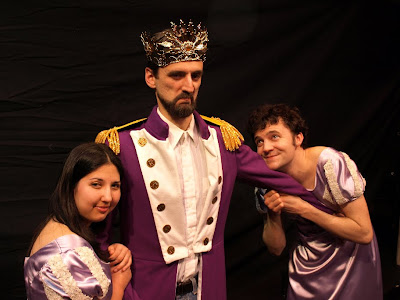 How about puppetry, cross-dressing, general confusion, sword fights, and even true love? If you’ve answered yes to any of the above, then the King’s Proposal (or the Marriage of Princess Guido) is the play for you!

The story follows King Edgar (Jacob Hutchison), an evil ruler with an ego as large as his kingdom, who gleefully concocts a plan that is sure to bring him more wealth – having his love struck princess daughter (Aryn Nemiroff) married off to a prince (Nicholas Brownson). But there’s a slight problem with the arrangement – the princess is smitten with a common blood actor, Daniel, (Jonathan Wright), while her soon-to-be husband has his eyes on a Prince Charming-esque queen (Bo Mellinger), and Guido, (Brennan Buhl), the king’s hilariously bumbling assistant, is blundering through the chaos, causing even more trouble in this tangled web of love, lies, and ludicrousness. 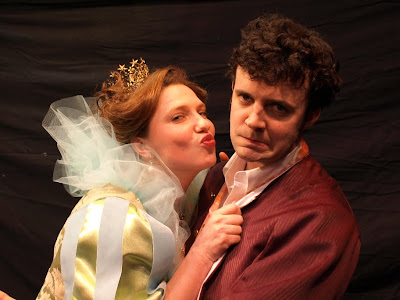 The acting and singing are strong, the comedic timing is right on target, and all the characters are very well cast. They break the fourth wall so frequently, from falling off the stage to spending an entire song frantically following the spotlight (and even ordering their companions to freeze during their soliloquy!) that much chewing gum and duct tape will be required to piece together the fragments of the barrier that separates the audience from the action. It is easy to see just from the actors’ faces how much fun they are having. Jessica Hendrickson, who plays Bruce, Daniel’s very animated companion, states that her favorite part of working on the show was: “The people. Everybody was really funny. It was a great rehearsal process, zillions of laughs, every time. And every time you see the show,” she adds, “you pick up on a new joke.”

The King’s Proposal, written and directed by Michael Govier and musically directed by Curtis Williams, is a hysterical hit that is making its world premiere here in Seattle. This is hands down the funniest show I have ever seen, and I plan on going back. I highly recommend this play – don’t miss it!