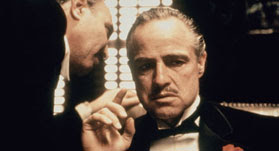 I am ashamed to admit that I waited seventeen years to watch the Godfather movies. For years now I have been hearing about this cultural phenomenon with quotes used in all sorts of settings; the most common being the famous phrase and motto of the Corleone Family “I’m gonna make him an offer he can’t refuse.”
While I am not the type of girl who watches chick flicks and strays away from any movie involving blood and violence, I still found myself hesitating to start watching these movies. I knew there was going to be a lot of people dying and since I have a tendency to get attached to characters (I was devastated when Piggy died in Lord of the Flies), I knew I could be in for feeling some strong emotions. What I found to be amazing about the Godfather movies is that they manipulate how you feel about each death. Whenever someone died, and I knew it was “for the good of the family,” I was totally ok with it but when someone working for the family was killed, it made me feel downright mad. The fact that I wanted this mafia family to succeed and that I considered them the good guys puzzled me and made me realize just how great these movies are.
The first movie “The Godfather” introduces the audience to the Corleone clan, a strong mafia family in the late 1940s. Most importantly the viewers meet Vito Corleone (Marlon Brando), the “don” or “godfather” of the family, and his youngest son Michael (Al Pacino) who, resisting the family business, enlisted in the marines and has returned home a war hero. We are also introduced to the Godfather’s other sons, Sonny (James Caan), Fredo (John Cazale), Tom (Robert Duvall) who is adopted, and his only daughter Connie (Talia Shire). When a drug trafficker asks for help from the Corleone family and is rejected, he has the Godfather shot. Luckily the Godfather survives but the events that occur because of his near fatality change the future of the Corleones forever, especially that of Michael. Michael, after saving his father from a second murder attempt, convinces his brothers that it should be he who murders his fathers attempting assassins. This decision sets the stage for Michael to become the new Don of the family after his brother Sonny is murdered and his father’s health finally fails him. The movie ends with Michael showing the other heads of the five mafia families how powerful he is by having each of them killed. The movie leaves you feeling conflicted because in order to become the new Don of the family Michael has lost the good morals that made him so lovable as the youngest son of the Corleones.
The second movie focuses on Michael’s new rule as the don of the Corleone family while also telling the story of his father’s life (Vito) and how he became the Godfather. This story has a more complicated plot filled with backstabbing characters and multiple mafia related murders. The parallels between father and son are shown as we see how both Vito and Michael started out as innocent boys and how their lives changed upon the murders or attempted murders of their fathers. However, the audience is able to see differences in the life of Michael from that of his father’s. Vito always made his business about his family where Michael’s business maneuvers cause him to end up with a ruined marriage and a betrayal by his brother that almost kills him. I loved the insight that this movie offers into the characters and how the family business may not be such a good thing. This second movie takes a lot of the glamour out of the mafia life that I felt was portrayed in the first.
So the Seattle International Film Festival Cinema is showing newly restored prints of the Godfather Parts 1 and 2. As a newly made Godfather fanatic, I highly recommend that you take the time and check out these restored masterpieces in cinematography. I honestly think that these movies should be a requirement for everyone to watch at some point in their life but don’t take my word for it. Go see the Godfather parts 1 and 2 and then spread the word about just how extraordinary these movies are.

The Godfather and The Godfather Part 2 play at SIFF Cinema
located in McCaw Hall at Seattle Center
December 19 thru January 1st
see www.siff.net for a complete list of showtimes, including several double feature options