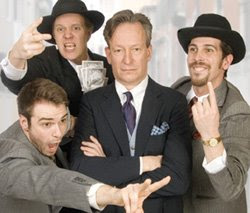 A review of The Merchant of Venice
at Seattle Shakespeare Company
by Emma M.

Revenge is what Shylock wants, and Antonio’s the target. Antonio may be pretty awful to Shylock but does he deserve to have a pound of flesh cut off him? The answer, says William Shakespeare, is mercy. Throughout Shakespeare’s play The Merchant of Venice the themes of revenge, power, justice, and mercy are played to their extremes. Meanwhile the other characters struggle with problems of their own. What would you do if a crazy Moroccan Prince was trying to win your hand in marriage by picking out which box had your picture in it?

Hilarious and serious all at the same time, The Merchant of Venice, now playing at Seattle Shakespeare Company, is well directed by John Langs. Langs doesn’t try to make the play end nicely, it’s bittersweet and it’s just what it needs.

The whole cast was great but one person must be mentioned. Charles Leggett as Shylock - he is brilliant. Leggett’s performance is a powerful and moving one. He plays a Shylock that you can relate to, and you feel his pain so vividly when his daughter leaves him. His body movements and downward gaze subtly portray Shylock’s insecurity.

Also brilliant was Troy Fischnaller as Gratiano and the Prince of Morocco. How can one’s pants fall down and one not know it? Apparently it can happen and is extremely funny. And when the Prince tries to decipher the cryptic message on the chest and fails? Aw, poor Prince! Fischnaller is not one sided though. When Antonio is condemned, he is all fury and you really believe that he could, and would, hit Shylock if his friends didn’t hold him back.

From Portia’s country villa, to a happening night club, to the stark court room the lighting is what transforms the sets and carries you through the story. Geoff Korf’s lighting is amazing. You have no trouble filling in all the gaps that the minimalist sets, designed by Jennifer Zeyl, leave out. It’s all so clean and crisp. Even the costumes, designed by Teen Tix’s very own Pete Rush, hit that Wall Street feel and aren’t over embellished, so everything fits together harmoniously.

A beautiful mix of great directing, amazing acting, and a thought provoking story makes this production a stand out.

The Merchant of Venice plays at Seattle Shakespeare Company
located in the Center House Theatre at Seattle Center
now through April 5, 2009
visit www.seattleshakespeare.org or call 206.733.8222 for tickets and info