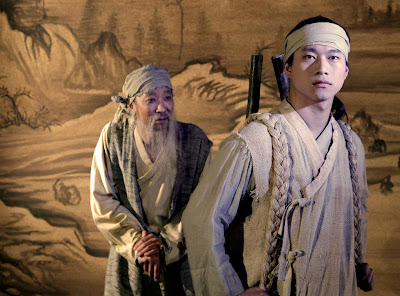 I haven’t been to SCT in years, and never unless it was a field trip when I was in elementary school. Since then, I’ve been to a handful of plays at more adult theaters, like ACT and the 5th Avenue Theatre, so I know what a professional theater performance looks and feels like. But honestly, when I walked in to SCT to review A Single Shard, I was already mildly impressed. The play’s backdrop looks hand-painted, with a Korean watercolor painting of a river with several mountains in the back, and gives off a feel of authenticity, which is exactly what a historical fiction play like this needs.

The lights dim, and A Single Shard starts with a dance with the dancer wearing a very light-looking shawl. It is a nice dance (though the dancer should be more light-footed), and then a chorus of surrounding characters announces the name of the play. From the start, there are very good background sound effects and music, which make it seem more realistic. The lines of the characters sound scripted (but, as was a moral lesson expressed in the play, you never fail if you try your best, as was the case with these actors, who do an okay job of making the lines sound more realistic and portraying their characters). Though there is one member of the cast that who does an amazing job: Mistress Min (Naho Shioya), does a very good job of portraying a very nice, old woman, with hospitable and mother-like qualities. 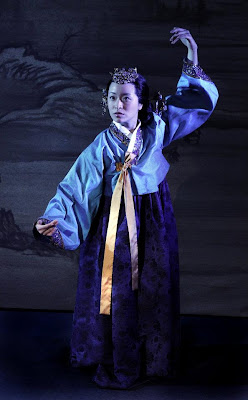 Yet another character, Crane Man, sounded more like the much more energetic 30-year-old actor Ho Kwan Tse who played him than he did a crippled old man desperate for a better life. But I do have to compliment the cast of only 9 actors for portraying 26 characters.

A Single Shard has a good flow to it, and the ending is relatively short, satisfying (and, of course, happy). But, at the preview performance that I attended, I could sense that the kids there weren’t heavily interested. Some of them moved more in their seats than I would expect them to there are occasional jokes and yet could sometimes drag on, so they didn’t laugh much.

Altogether, though, it is a thought provoking and very well-made play. So, I would suggest taking your closest 6-10 year old to A Single Shard for a time of entertainment and learning of non-basic but important morals, as long as they don’t get bored too easily.