Review of The A.W.A.R.D. Show, Thursday, January 27 at On the Boards by Monet C. (and her friend Elizabeth) 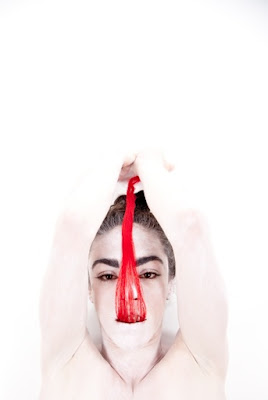 Many, many, many things can be said of zoe|juniper. The “dance” starts out with Zoe having a red string clenched in her teeth and moving rather erratically on the end of it, almost like a fish out of water. After she has finished there, she draws her shadow on the wall while her partner, Raja Kelly, repeats her red string performance. I had to keep telling myself “It is interpretive dance. It is interpretive dance” as he writhed across the stage. A few minutes later, he and Zoe are sitting across from each other and remove their “tunics” (aka mesh shirts)…… Thankfully, the curtain closed after a minute. zoe | juniper won the vote on the 27th.

My friend and guest, Elisabeth (19), had a few thoughts on this:

“Visually arresting, atmospherically compelling, and emotionally disturbing, this abstract work put multimedia to the task with the incorporation of chalk drawing and projection. The technicality was impeccable, yet the artistic freedom unhindered. The climax, a bestial display of growling and barking, crystallized the smoggy, distorted emotion of the first half into a sense of heartbreak; the unexpected but perfect apex.  The only drawback, though I understood the choice, was near the end, when the two dancers complacently stripped to the nude. I feel that there are other ways to accomplish the effect while preserving the dignity of the performers.  A near perfectly beautiful and unsettling creation, but flawed.” 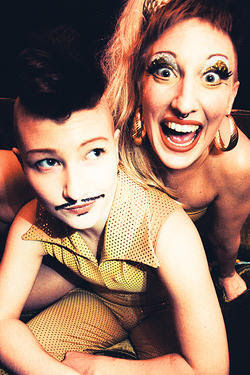 Oh, Charlie Chaplin would have been proud to meet these two fine actors/comedians! Between walking on glass and framing me (with a picture frame, of course!), they had me roaring with laughter! Cherdonna’s over the top fussy/frantic/drunkenness and Lou’s silence/studious/musicalness give this a delightfully Linus and Lucy all grown up feel. Oh, and the glass doesn’t hurt. Don’t worry.

“Two Crumb-esque characters, diametrically opposed, flooded the stage with outrageous humor, awkward moments to which each of us can relate, and melodramatically introspective breaks. The one a bubbly hostess, the other an inverted artist, they play off each other to the effect of a drunken stupor. I did not want to like this piece, but its charms were irresistible, and I walked away a fan of the act.”

In a dance about nothing else than, and Crispin admits it too, sex, she captures it well. Also, Crispin captures high school and life in general.

Elizabeth noted that “the process of five people gleefully shifting from one to another reminded me of the often loveless atmosphere of high school, in which boyfriends and girlfriends are traded back and forth till everyone has been with everyone, but no one's really loved another, did not convey a bohemian happiness but rather a sort of weak depression. Essentially, the face didn't matter so long as there was a body, of either gender."

A rather depressing let down, as the dancers never moved as one, or even tried to.

“The dry humor of the narration at the start had me interested, but as that died out in exchange for a music accompaniment I found myself grasping to keep interest. The dancers were good, but the choreography did not engage me until after the second clip of narration, in the last quarter of the piece. I like the music and story, but the performance was so devoid of emotion that I could not connect. The dancers didn't seem to invest spirit in it until the small bit at the end and worked like soloists in a duet, leaving the potential of collaboration virtually untapped.  I wanted this to be good, as it was refreshingly free from the heavy degree of sexual weight carried by the first three pieces, but found it too much bound by its technicalities to be able to reach the artistic expression in strained at."

zoe | juniper won the first night of A.W.A.R.D. Show, and will move on to Sunday night's final. Stay tuned to the blog for daily A.W.A.R.D. Show recaps by our reviewers.

The A.W.A.R.D. Show
On the Boards
Through Sunday, January 30th
TICKET NOTES: The A.W.A.R.D. Show is expected to sell out each night, however, there will be a wait list! Call the box office (206-217-9888) after 3:00 PM on the day of show to inquire about ticket availability. Sunday night's finale IS Teen Tix eligible, however, no companion (2 for $10) tickets will be available.