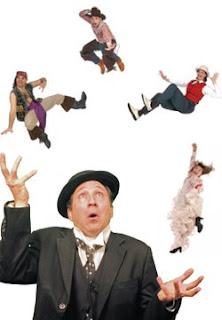 A Review of Servant of Two Masters
At Seattle Shakespeare Company
by Jennifer B.

With actors triumphantly marching down the aisles, audience members having their names being bellowed to all their fellow escapists, it is not the first thing that you would expect. Normally when you go to a show you anticipate going to sit down quietly and drink your warm refreshment, but instead you are jostled awake. The audience is immediately immersed in the play before they even take their seats. It is a full audience, actor, and technician warm up. This is an interactive opening of the Seattle Shakespeare Company’s production of The Merchant of Venice… no… no wait, it is the opening of The Servant of Two Masters. This explosive opening of a cast getting confused on what show that they will be performing sets the audience up for an explosion of several different kinds of comedy. This is a comedy that has been rewritten by Carlo Goldoni which came from Shakespeare’s repertoire.

How could a company make such a switch up of what show they were doing? I don’t think that the answer will ever be known. Though, one thing is for sure, it does set up a show for a lot of laughs. This is a tale that is filled with several love stories, each with its own twists and turns that keep you guessing - especially when the story is filled with awkward occurrences such as a woman playing a man who dresses up as a woman. Even still, nothing is as interesting as the servant who is caught up in it all by greedily deciding that he can handle having two masters - not even greed, revenge, and even a slight case of murder.

The technical aspects of the performance were brilliant, from mocking of some clichés to helping the actors perform some of these clichés. One of the first things you see on the stage is a bright yellow ladder with red and green paint splatters -killing the classic Our Town black ladder, and making it draw your immediate attention instead of having it blend into the background. Every character’s costume fit perfectly for “before the show” and after it started. Deane Middleton made each of the character’s costumes both match the character, and at the same time, mismatch the rest of the cast. All of the costumes were of different time periods though they were still stock costumes. Plus, the costume malfunctions added to the comedy. Another aspect was the music, which was brilliantly timed and performed by Robertson Witmer.

Overall, it was like riding a roller coaster, though the main downside was that the “downs” seemed to stay a bit too long. The majority of the performance was fast-paced and hilarious though the second half of the Act I hit a huge slump. Some of the jokes were a little tired after the 20th time, such as a sword being excessively swooshed around, or an exaggerated dance move that was done once again. Was not the rule for theatre that of only using something three times? Through the second half of the performance, most of the jokes did not carry over, rejuvenating the performance. The acting throughout the cast was well accomplished especially in the case of the servants. Both Chris Ensweiler and Kerry Ryan shined in their comedic roles. The cast always worked well in ensemble scenes.

There were a few problems with inconsistency. In the beginning of the show it was very clear that this was a performance that they had never performed before, though by the end it seemed like it had been run through quite a few times. Some characters overdid that it was the first time they were performing and others underdid it. The second half of the first act would have been better off with some more comical variation and less slapstick; there were yawns heard throughout the audience. Though Dan McCleary did stay to the authors intentions, he needed to have the best interests of the audience in mind as well.

This is a wonderful venue in which to see a show, especially when actors are running up and down the aisles next to you. The show is literally at your feet. The staff is extremely friendly, and the foyer has a cheerful atmosphere. Over 75% of the show was a great success, fast-paced and side-splittingly funny. If they just tightened up the slow and eliminated the repetitious spots, the show would be amazing. But overall, I would recommend this show.


The Servant of Two Masters plays now through February 1st, 2009
at Seattle Shakespeare Company, located in the Center House Theatre at Seattle Center
visit www.seattleshakespeare.org for showtimes and info