It's the final week of the Teen Tix (he)ARTSCrush Adventure Quest. All you procrastinators out there are now sufficiently close to the wire, we hope. If you've seen something and you just haven't taken 5 minutes to write your note about it, do that now. If you haven't seen something yet, here's one idea: 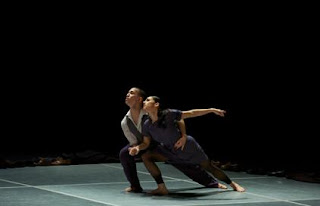 Join Spectrum Dance Theater for a glimpse into the creative process with an open rehearsal for The Dybbuk, a collaboration between Music of Remembrance and Spectrum Dance Theater. Based on S. Ansky's play of the same name, The Dybbuk tells the story of a young scholar who dies upon learning that he cannot marry the girl he loves. In an attempt to prevent her marrying another, his spirit possesses her. Utilizing this story, the performance explores the world of obsession and unrequited love. Artistic Director Donald Byrd will create a new dance theater piece to the original 1922 incidental music. The rehearsal will take place in Spectrum Dance Theater's intimate Madrona Studio and will allow you the unique opportunity to see the choreographic process in its early stage. The night will include an informal Question & Answer session with Donald Byrd and Spectrum dancers. This event is free, but an RSVP is required.

Going to Spectrum Dance Theater for the first time? Write us a note about it, and you might win a fabulous prize pack including tons of tickets and memberships to local arts venues. It's the Teen Tix (he)ARTSCrush Adventure Quest! All you have to do is go to this form, write a note (150 words or less) about your experience at a new-to-you arts venue, and hit "Submit." Boom. You're entered to win. Do it over and over and over again and you might get crowned Seattle's Bravest Young Arts-Goer TM. More details here. Good luck!