A single shining piano graced the stage at Benaroya Hall. The crowd murmured in anticipation, though a few curmudgeons could be heard complaining about the program, which they had thought would contain works by Liszt. The selection had been altered beforehand. It was, in fact, an afternoon of bliss composed by Ravel and Brahms. As beautiful as their music is, the quality of this recital certainly cannot be decided solely by the chosen pieces, but by who played them. 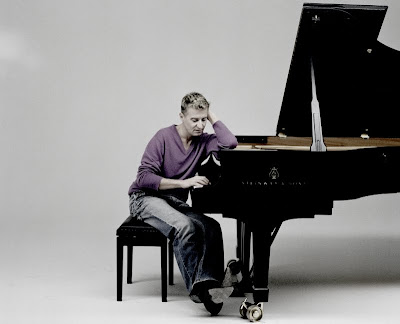 When the lights dimmed and Jean-Yves Thibaudet strode energetically across the stage, the mumbling ceased. This is a pianist with a magnificent stage presence. He sat down at the piano, and remained still for a long moment, his hands poised over the keys; then he began softly with Ravel’s Pavane pour une infante défunte (1899). Monsieur Thibaudet, a Frenchman who began playing the piano at the age of five, has won numerous awards for his astounding artistry. It is easy to see (or rather, hear) why. His Pavane was filled with shifting emotion -- sometimes solemn, sometimes uplifting; he brought a depth to the piece that is not present in the original, rather choppy recording by the composer himself. In yet other interpretations, the tone can be too ponderous; here, however, was a perfect balance.

Thibaudet’s interpretation of Miroirs (Mirrors) was my favorite of all that he played. The pianist’s hands danced over the keys with amazing grace and fluidity, lending to the hypnotism of the melodies themselves. It is impossible to describe the array of images called up by these varying “scenes” -- the delicate, excited quivering of Noctuelles “Night moths,” for example, and the brisk sunniness of Alborada del Gracioso “Gracioso’s Aubade.”

By the intermission, it is doubtful that anyone was disappointed in the selection, nor in how it was performed. The second half of the performance consisted of Johannes Brahms‘ Piano Sonata No. 3 in F minor, Op. 5. The movements ranged from the tumultuous and crescendo-filled (Allegro maestoso) to the calmly reflective. In each, however, the audience was always drawn into an intricate path of notes. There is plenty of suspenseful contrast throughout. I loved the rapid note sequences in the fourth movement (I am not sure of technical terms, but I believe these are called arpeggios.)

The entire performance was so stirring and gorgeous; if you have the chance you absolutely must hear Jean-Yves Thibaudet in concert. Consider that this was the first piano recital I have ever attended; and to be honest, I am often bored by piano music. So even if you are not a big fan of classical piano, you may be pleasantly surprised. At the very least check out some of Thibaudet’s recorded music (such as the Gymnopedies composed by Satie or a collection of works by Debussy), which can be found at the Seattle Public Library.

The Jean-Yves Thibaudet concert was one night only, but pianist Ingrid Filter will take the stage at Benaroya March 11th & 13th with a concerto by Haydn. More info at seattlesymphony.org.