If there is one name that has stood the test of time, a recognized staple of democracy and equality, it is surely that of Abraham Lincoln. President Obama heralds him as his favorite President, while history books laud his actions and sing his praise. The side of President Lincoln that we know is one of strength and force. Through his fight for ultimate American values he arguably established himself as one of the figures whom our nation is most proud to call its own. Yet, at what cost to his person, and at what toll to his spirit? These questions are explored in Intiman’s illuminating biographical play, Abe Lincoln in Illinois. 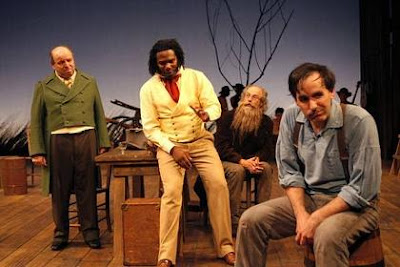 Written by Robert E. Sherwood to commemorate Lincoln’s Bicentennial, this play examines the period of Lincoln’s life from his early adulthood to his election. Fictitious characters share the stage with historical figures, including Lincoln’s wife Mary Todd and adversary Stephen Douglas. A great theme of the piece is Lincoln’s attachment to Illinois, and accordingly the play itself radiates a strong sense of community. This is conveyed by members of the ensemble sitting onstage to watch scenes, and singing during set transitions. Their rapport with each other creates the ease and simplicity of Lincoln’s home life. The stage is mostly bare, set against a background of high grass and a tree blowing in the wind. Wooden slatted pillars stand off to the side, used as entrances and exits, while a wagon is moved around the stage throughout the various acts. All of these components create an environment of comfort and familiarity.

When the audience is first introduced to the President-to-be he is, all in all, what we expect - the unkempt, charming backwoods boy striving to learn and better himself. Yet as time progresses he is revealed to be insecure, tentative - anxious even, constantly questioning his validity as a man and a thinker. His self-deprecation weaves its way throughout his entrance into politics, at some times endearing, at others off-putting. This is more of a comment on Lincoln’s own person than the actor behind this rendition, Erik Lochtefeld. Mr. Lochtefeld expertly colors in the aspects of this man that we recognize, and also those that are unfamiliar - his Lincoln is awkward, sensitive, introspective, and commanding.

Mr. Lochtefeld is strongly supported by a seasoned cast, with the wonderfully passionate Peter Dylan O’Connor as Billy Herndon, impeccable R. Hamilton Wright as Stephen Douglas and robust Hans Altwies as Joshua Speed standing out. Also to be noted are Angela DiMarco as Lincoln’s ill-fated sweetheart Ann Rutledge and Clayton Corzatte as a delightfully blunt and cynical Ben Mattling. The only weak link in this cast of nineteen is Mary Jane Gibson, as Mary Todd. She delivers the character with precision, but lacks the fierce strength that she so often declares possessing.

Sheila Daniels expertly directs the play which is a beautiful mix of comedy, thoughtfulness and excitement. It is a balance between the public and private life of a deeply contemplative man. Lincoln’s quest for moral and self-understanding shows the importance he placed upon his actions. As he anguished over his decisions and values, so he showed the respect with which he held his position. Nothing was taken lightly during his life, nor is it in this production. His story is handled with care and sensitivity by all. As the generations look towards a new leader in Washington D.C., it would be worth their while to revisit one of the past in this revealing and delicate production. Abe Lincoln in Illinois is a must-see.