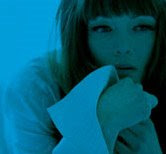 A review of Betrayal
at Seattle Repertory Theatre
by Zoe B.

The plot of Betrayal is not uncommon; a woman is having an affair with her husband’s best friend. What makes this rather mundane plot interesting is the structure. The tale begins two years after the affair has ended and winds backwards in time to its conception.
The best parts of Betrayal, and probably the most horrendous part of having an affair, are the moments when one person knows much more than the other thinks they know. The husband asks questions he knows the answer to, just to watch his best friend lie. Or the wife sits in bed, saying little, with her book still open on her lap, as the husband unravels the details of her deception. Harold Pinter was a playwright known, in part, for his use of pauses to demonstrate the tense nature of situations where his words would only be cumbersome and would betray the true feeling of that moment. Betrayal is full of silence, full of tiny eruptions.
Betrayal is a play that simmers; it never boils over. In part, this is because Harold Pinter was British and the characters in Betrayal are thoroughly British. Their emotions are quiet, pushed down. This could have been played, however, with similar intensity to the shrill, angry energy one would expect from an American play on adultery. But it wasn’t. There were moments, yes, where all the energy needed was there. In general though, the play felt flat.
I blame the transitions. One of the challenges of Betrayal is that it travels, in about 75 minutes, through almost ten years. Which year it is becomes hugely important in understanding the affair. Has it started yet? Does the husband know? This problem was solved neatly by projecting the year above the stage. However, the set and costume changes one would expect in a theatre such as the Rep, required quite a bit of time. As the set changed, and as actors hastily pulled on different outfits and different wigs, a distorted home video played in the background. The video was of a man catching a little girl in his arms after throwing her up in the air. It referred to a repeated story told in the play, and while I’m sure it was supposed to communicate some deep feeling of conflict, it was just distracting, bordering on cheesy. In fact, the whole vibe sent off from these transitions set the play off kilter, made it seem silly when it was striving to be serious. It seemed to me as though the audience was laughing at moments that weren’t funny. My inept interpretation of British humor aside, Betrayal isn’t a comedy. A man afraid his best friend will never speak to him again? Not funny. Thinking for a moment that you have been raising a child who is not your own? Not funny.
Betrayal is a classic and for five bucks, probably worth seeing just to grasp how to use such an unusual structure. However, if you are pressed for time this month I’d probably just skip it – there’s a lot of great shows coming up.
Betrayal plays at Seattle Repertory Theatre now through March 28th.
For tickets and info, visit www.seattlerep.org or call 206.433.2222