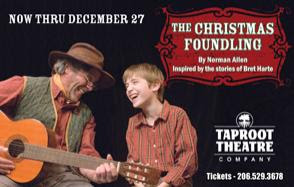 A Review of The Christmas Foundling
At Taproot Theatre
By Emma M.

The Christmas Foundling, Taproot Theatre’s holiday offering, brings to the season a story of family and love and many fabulous performances.

It’s a story of a group of slightly bumbling miners who try their hand at raising a child and then dealing with his long lost family when they arrive on their doorstep ten years later. The play is inspired by stories by Bret Harte who was considered during his time, the American Charles Dickens and was more popular than Mark Twain.

Under the direction of Karen Lund, the ensemble gave a good “telling” (as the characters would say) of this powerful but simple story. Although most of the actors gave solid, professional performances, the character of Moscow, played by David Anthony Lewis, was especially appealing as a romantic Russian.

The production did a good job of presenting the difficulties and triumphs of the characters as they grappled with some tough choices. However, the ending of the play could have been stronger in the reasons for resolution.
The Christmas Foundling gives audiences the opportunity of thinking about what it means to be a family and that is a great gift during the holiday season.

The Christmas Foundling plays now through December 27th
at Taproot Theatre in Greenwood
for tickets and information
visit www.taproottheatre.org or call 206.781.9707