Review of Gamelan Gadhon at Cornish College of Arts by Alyssa T.

Soft-style gamelan music is the music of ancient princes. It’s the music you’d ask for as the king of Indonesia, surrounded by elephants in a room ornately decorated with rose petals, candles, and incense. It’s the kind of music you want to fall asleep to, and the kind of music that lulled my mind and lifted my spirits during Gamelan Gadhon's Cornish performance. 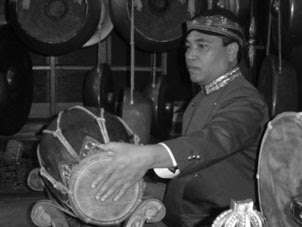 But as much as I yearn to appreciate gamelan music while it was being played for me, as much as I would like to say I was absolutely blown away by the masterfully played world music of Cornish College of the Arts’ Indonesian-instrument playing group, Gamelan Pacifica (the parent ensemble of Gamelan Gadhon), the fact is I wanted to leave midway through the second song. Don’t get me wrong. The quality of the musicians is nothing short of topnotch, each instrument is a finely crafted work of art, and the strangely chaotic song compositions are brilliantly harmonized, but the presentation of this soothing, almost spiritual, style of music felt stifled.

I have no doubts that “Gamelan Pacifica is among the finest ensembles in the United States devoted to the performance of gamelan music.” But after listening to the performance, I honestly feel the group would have been much more appreciated in an open and relaxed environment.

Imagine walking down the Pike Place market on a warm day with the sun gently gracing your cheeks. Through the bustle of the crowd, you hear hints of the kendhang, the Javanese drum, which immediately spark your interest. As the curiosity of your ears pulls you towards the sound, a calm internal peace comes over you, and suddenly, you understand the serene expressions on the musicians’ faces. In a place of fresh air and energy, the power and beauty of the gamelan music is on full display. Now imagine a fairly small stage barely large enough to fit the musicians and their instruments, and seats that restrict audience members to sitting and staring. The results just aren’t the same.

By saying what I am about Gamelan Gadhon, I don’t mean to pass any negativity onto Cornish College of the Arts whatsoever. In fact, I think they’re wonderful for bringing something so different and unconventional to Seattle. They did all in their capacity to bring gamelan music to Seattle, and they absolutely succeeded. All I’m doing is stating an opinion on temporal art I probably wouldn’t have realized had I not gone to Poncho Hall that night.

For me, seeing something new and out there is always rewarding, regardless of whether I see perfection in the performance or not. If the same thing goes for you, and you haven’t seen world music yet, I encourage you to still see Gamelan Gadhon. This may be off-limits for me to say, but the end of this month, Gamelan Pacifica will be performing with guest dancers and musicians at Meany Hall [Editor's note: this performance is NOT Teen Tix eligible]. I hope you will give them a chance to rock your world.

Next up in Cornish College of the Arts' Music Series: Jazz into Blues: An Evening with Kelly Harland
Saturday, April 16 @ 8 PM
More info at cornish.edu