"Awesome"
Part one of six: The Crushiest of Them All
by Joshua G.

One question asked of the 6 (of 7!) members of "Awesome" is to identify which bandmember deserves the true and rightful honor of the prestigious title of Teen Tix Crush of the Month! The general consensus of the band being that, Evan (trumpet/vocals) is THE total stud of the band. (With his "rocking of the beard" says Rob and "indy rock attitude" according to Basil.) In response, Evan blames his unmarried status and "in-between hair" (compared to the SUPER long John O's) Evan, “like all theater geeks secretly do...” dreamt of being a rock star. 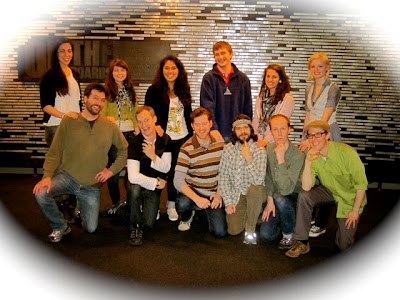 The "Awesome" boys and the Teen Tix reviewers having a blast at prom.

The band's latest performance is set to "take the [band] into new places ... really unexpected," John A. (mandolin/keyboard) says with modest hype and anticipation. According to him the band seems to have two modes: "clubs and theater," the upcoming On The Boards show tending to follow the latter.

Creatively the band is trying something very different from last year's shows at ACT. John says there latest outing is “more structured,” but David (banjo) says that the two years allowed them to “dick around.” David goes on to connect “Awesome”'s whimsical tone on the band's history as an improv comedy team.

The impact of They Might Be Giants is also seen in conversation with Rob (accordion/saxophone). “I met the band through a They Might Be Giants Tribute.” But when asked of the band's rather pretentious name, he just laughs. When asked, "Whats a good band name?" “Awesome” was the name that emerged. “Yeah, it kinda stuck...It's in quotes.”

The band members seem like the best of friends. Want proof? Basil and Kirk(fashionably balding drummer) grew up going to high school together.