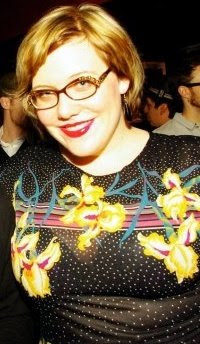 In honor of SIFF (Seattle International Film Festival), which starts on Thursday, we decided to crush out on Stranger Film Editor Lindy West! Lindy was kind enough to talk to us about how she became a writer, what it's like working at the Stranger, and what kind of dinosaur she would be (if being a dinosaur was something you could do in life) even though she hadn't slept for about a week. As you will see, she is funny, charming, and thoroughly crush-worthy. Thanks, Lindy! We heart you.
For more videos of Laura's interview with Lindy, check out our YouTube.

LV: How did you get interested in writing?
LW: I mean it was always sort of the only thing I was good at. My dad's a writer, and it always sort of came fairly naturally. But I never really planned to be one, 'cause it's kind of an impossible thing...or it feels like it ... Anyway, I went to college and got an English degree and then I graduated from college and had nothing and I had no skills, except for writing. So, I took an internship at a magazine that was not something that was interested in at all. It was about babies. It was like a free magazine about child rearing in L.A. I wrote things that I was not qualified to write and got thrown into all these weird writing assignments and had to figure out how to do it, and it was really actually a good experience, even though it was boring and weird, and I was giving people medical advice even though I was 21 years old and didn't actually know anything. From there I moved on and got another internship and I ended up interning here at The Stranger. And just sort of figured out where I fit and what kind of writing I was good at. Really just a series of lucky accidents pushed me along and I ended up here.

LV: How did you start working at The Stranger?
LW: So, I'm from Seattle, so I grew up reading the Stranger. I mean, to me the Stranger was like celebrities and I can't imagine how fun it must be to work there, and I used to do weird things to like cut out their articles -- of people that are now my friends and colleagues -- and I have never told them that...Dave Schmader...he was like my favorite writer.
Holly: He's gonna know now!
LW: I know. And he's gonna be real weird about it. I love you Dave.
Anyway, but I always felt like I would be a good fit if I could figure out a way to get into such a fun, awesome publication like the Stranger. So, I had a friend from high school that interned here when we both in high school, in the news department, and she was always like "You should try and do it, you should do it, you should do it." ... She sent me an ad that the Stranger was hiring for a Theater Intern and I was like "Okay, I guess I'll do it, even though I know anything about Theater. It's cool." And it was really boring, but then she let me have one writing assignment and I did a good job, and she let me have another writing assignment, and then I didn't go away, and she kept sending me to things, and then, eventually, the Theater Editor became the Film Editor, so I started writing movie reviews, and then, several years passed, during which time I had many exciting day jobs such as cashier and personal assistant. Then the Film Editor left to go to law school, and then they hired me for some reason, and it was really awesome. And now I'm still here. Yay. They haven't fired me yet.
Here's a video of Lindy answering this exact same question. But on video!

LV: What do look forward to at SIFF?
LW: It's really fun. You end up seeing all kinds of things that you wouldn't normally go see or have the opportunity to see. And it's corny but, even if a movies bad it's so fun to just see this weird corner of the world that you didn't know existed. 'Cause I am not a geography expert. Last year I watched this movie from Iran and the whole thing was in a snowy forest. And I was like "I didn't know they had snowy forests." ... There's weird moments like that, where you're like "Oh, I didn't know that Mongolia is the prettiest place ever." Or, y'know, there's giant cities in the middle of China that have five times the population of Seattle that you've never heard of. It's just really interesting. And obviously there's great pieces of art that people make and you have the opportunity to see them. It's also just a fun community thing. There's people out all over the place going to things and talking about movies and going to parties. So, it's fun.

LV: Anything you don't look forward to?
LW: I don't like the part where I don't sleep for a month, that part's lame. (But I only have two more days of that.)


Lindy and Laura talk SIFF
LV: How do you feel about being the Crush of the Month?
LW: Pretty. Totally awesome. Warm in the heart.

Read the Stranger's SIFF Guide here (Note: contains grown-up words)
Find out everything you need to know about SIFF, including schedules and venue info at siff.net