"Awesome"'s show West closed yesterday after a triumphant weekend. They are taking it up to Calgary this week, and then they'll put it to sleep for a while and get back to their regular-people jobs (whilst, no doubt, plotting their next opus.) Rock stars: they walk among us.

Kaya: Do you have a job besides being in the band, and if so what is it?

BASIL washed dishes in high school, but moved on to working for a PR firm. Currently unemployed, he is spending time with his daughter.

EVAN works in the student activities office at the U dub, where he collaborates with the student government and various clubs. Recently he used his influence there to get his band a gig...well there were other factors. 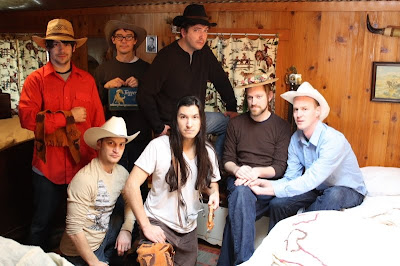 DAVID is a professor of philosophy at UW Bothell. Though his teaching and music used to be very separate, he is recently discovering that they can be integrated through such classes as History of Music!

ROB made his debut in the work force playing the clarinet for a show at Village Theater, in high school. Currently he is self employed; he makes a living through music composition and performing with his various bands.

JOHN has found a way to bring his passion for music to his day job, he teaches parent/child music classes. According to him, there is no joy like hearing a young child sing and create music.

KIRK experienced a great deal of work related injury (electrocuting himself, falling from scaffolding etc.) before he found his current position at Amazon. No one there knows he leads a double life as a musician. Sorry Kirk, secret's out.

Find all the "Awesome" you could possibly need at awesometheband.com and on facebook.