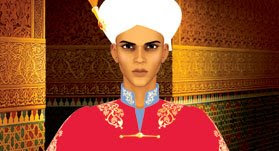 A Review of Azur and Asmar, at SIFF Cinema
by Delaney M.

I watched the SIFF film Azur and Asmar, which was produced in 2006 in Belgium. Azur and Asmar was written and directed by Michael Ocelot. It stars Cyril Mourali and Karim M’Riba as Azur and Asmar, Hiam Abbass as Jénane, and Patrick Timsit as Crapoux.

Azur and Asmar is an animated film that tells the story of two boys, the blond hair, blue-eyed Azur, and the brown hair, brown-eyed Asmar, who were raised together by Asmar’s mom (Jénane). As both boys grow up, their paths get forced apart. Azur is sent to school in the city while Asmar and his mom get thrown out of Azur’s father’s house. The story then starts again about ten years in the future when Azur washes ashore in Asmar and Jénane’s homeland. After a long struggle, Azur finds Asmar and Jénane only to discover that they are now influential and powerful. Azur and Asmar each set off on a quest to free the Djinn fairy, a mythical character from their bedtime stories so long ago, but will they unite together or continue to hold grudges against each other for the wrongs that Azur’s father did when they were children?

Azur and Asmar addresses the difference in culture between different peoples and how they can cause unrest and inequality. It also does an excellent job in emphasizing how what is beautiful to one person can be ugly to another, and that instead of fighting about it we should accept it and move on.

The acting talent was quite strong in the film. The relatively unknown actors Cyril Mourali and Karim M’Riba do an excellent job voicing their characters with lots of spirit and without going overboard and making the movie seem childish. The more well-known Hiam Abbass and Patrick Timsit give Azur and Asmar another dimension while also acting as the parental figures in the movie.

Azur and Asmar is a very intriguing film that would have different meaning for all of the age groups that see it. To young children it would simply be the story of the boys on a quest to save a fairy. For adults it is a movie with racial undertones that examines the inequalities in our society today, and for teens the movie is a little bit of both. I would recommend this film for people of all ages, as it is truly unique and very entertaining.