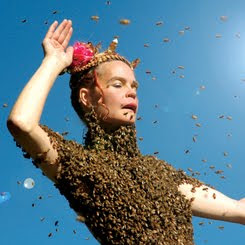 There are two films playing this week that should be on the calendars of all you compostin', tree plantin', recyclin', lovahs of the land (We're not making fun of you, we swear. We are you.)

Queen Of the Sun provides a profound, alternative examination of the tragic global bee crisis, known as Colony Collapse Disorder. Featuring Michael Pollan, Gunther Hauk, and Vandana Shiva, Queen of the Sun reveals both the problems and the solutions in reforming a culture to be in balance with nature.

Director Peter Byck spent three years traveling the country to visit with everyone from ordinary citizens to titans of industry, all of who are striving to be part of a new, low-carbon economy. The good news is we already have the technology to combat climate change, and it also happens to be very good business.

Both Northwest Film Forum and SIFF Cinema participate in the Teen Tix program. Day-of-showing tickets are always $5.00 for Teen Tix members. Ticket availability is not guaranteed. We recommend calling ahead before you head down to the theater.