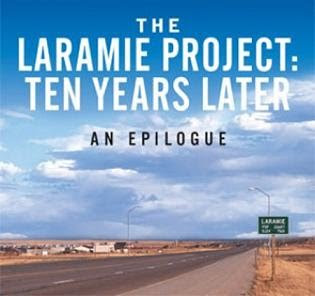 ONE NIGHT ONLY: The Laramie Project: 10 Years Later

Whatever you were going to do tonight, skip it and do this instead. On October 6th, 1998, Matthew Shepard, a 21 year-old student at the University of Wyoming, was tortured and beaten near Laramie, Wyoming by Russell Henderson and Aaron McKinney, who testified that they targeted Shepard because he was gay. He died of severe brain injuries six days later, on October 12th, 1998.

A New York-based theatre company, The Tectonic Theatre Project traveled to Laramie and conducted interiews with the town's residents. They made a play out of the interviews, and then HBO made a movie out of the play.


The trailer from the HBO film. (Note: contains derogatory language)

Tonight the Seattle Rep along with 100 theatres around the world will present a staged reading of The Laramie Project: 10 Years Later, an epilogue to the original, groundbreaking play. Our local reading features some of Seattle's best actors (Marianne Owen, Suzanne Bouchard, Sarah Rudinoff, Gretchen Krich, and Troy Fischnaller) and is directed by Jerry Manning, Producing Artistic Director of Seattle Rep.

The reading is free and open to anyone, but expected to fill up quickly. Doors open at 6:30. Live-blogging and tweeting are encouraged, as long as you sit in the balcony. The show is recommended for people ages 14 and up for mature themes.