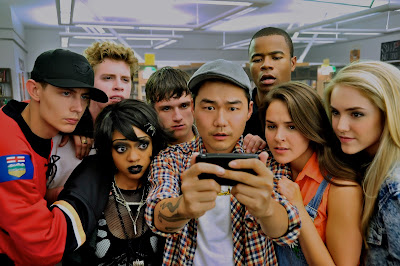 What Detention aims to be and what it actually ends up being are two very different things. Billed as a witty sendup of nearly every teen movie being made, it promises to be both a quirky parody as well as a horror movie. True to form, the writers seem to have worked hard to mock every teenage movie known to man in less than an hour and a half. References to teen classics are both endless and heavy-handed. I could have saved the writers some time in developing Detention: rather than go to all the effort of actually writing a story, they could have simply loaded the screenplays of Freaky Friday, Ten Things I Hate About You, The Breakfast Club, and Friday the Thirteenth into a gun, fired the gun, and then picked up the pieces at random. They would have ended up with a script of about the same caliber of meaningless drivel. 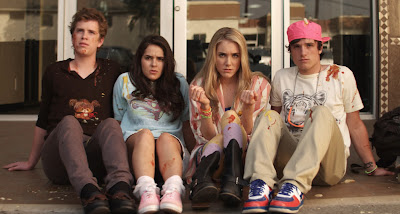 The simple fact is that Detention is prey to every imaginable pitfall in a teen movie. The acting is terrible, the direction is schizophrenic, the plot is simultaneously vapid, ridiculous, and convoluted, and the cliché is laid on so heavily that the actors appear to have actual difficulty standing up. While it is true that in teen movies these are all forgivable offenses, the biggest sin of Detention is that it simply does not have anything to say. As a film and a parody it is soulless; even spoofs need to offer their own insight and take on the world. All Detention does is merely giggle at and plagiarize other movies, without offering anything original.

To be blunt, this movie can definitely be passed over in your forays through SIFF. There are some real gems in this year’s festival, and they are not to be missed. Detention is true to its title in that being there is certainly a punishment. My best advice is to do like the cool kids: cut Detention and go see something Swedish. (…That’s what cool kids do, right?)