On Sunday, January 16, a group of over one hundred teenagers came to the Seattle Repertory Theatre. They thought they were there just to eat cake and mill around before watching The K of D, Seattle Rep’s edgy new play exploring urban legends. Little did they know, however, that they had just walked into my sinister, murder-tastic trap. As they milled around getting to know each other, I moved from table to table like a shadow, killing people as stealthily as I came. It should be noted that I am such a classy murderer that I need only inform people that I have killed them for them to die, no weapons required. All was going swimmingly until one wary witness caught me red-handed and turned me in, ending my homicidal streak and winning the game.

WATCH THE KAKE OF DEATH SLIDESHOW:

After I was safely in prison (don’t get too comfortable, though—state budget cuts have me eligible for parole in two years!) other fabulous awards to the partygoers were given, including free tickets to those who could guess which Seattle urban legend was a fake. All of these fancy and fun events transpired, of course, while set to the teenageresque soundtrack of FREAKOUT. Some daring Teen Steering Committee members even tried to get some action moving on the dance floor, but to no avail. I can only assume that they were terrified danceless by the dangerous, suave, and very sexy murderer prowling about. Almost everyone, however, enjoyed some of the Kake of Death, which caused only a few less deaths than I did. 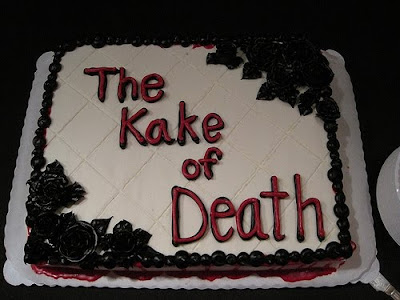 Soon enough, everyone got their seats and enjoyed some quality theatre. It was truly an excellent play, and Renata Friedman is a total beast. She manages to portray at least fifteen different characters distinctly and seamlessly, ranging all over the stage as she flips between personalities to tell the story. As she weaves her own legend, you’ll find yourself leaning forward, intrigued and morbidly fascinated by the story. 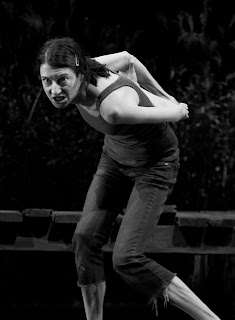 Beasty: Renata Friedman tears it up


So even though you missed the cake, go out and check out The K of D. It’s a great play, an intense story, and a production that stands out from the pack. But be careful…I might still kill you.

The K of D, an urban legend
Through February 20
Seattle Rep
The K of D is part of Seattle Rep's YES Project, their initiative to connect with young artists and audiences