Review of Dead Man's Cell Phone at ArtsWest by Karen B., age 16

This enthralling play is comically acted by a brilliant cast and crew. Jean (played by Emily Grogan) finds herself in a position of strange events when she undertakes the role of answering a deceased man, Gordon's (played by Mike Dooly) cell phone. She plunges herself down this rabbit hole of Gordon’s life. His mother, Mrs. Gottlieb, (played by Julie Jamieson) a very deranged woman, his brother Dwight (played by Tim Gouran) who is fumbling and love-struck over Jean, and Gordon’s also rather deranged wife (played by Peggy Gannon). I would not say the script was for the ears of a young teen but that of a more mature age due to earthy language. But those who are out on the town, men and woman alike, would thoroughly enjoy this fun and quirky story of love, death, and true life. 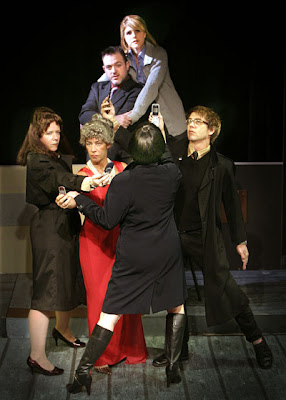 The set was not complicated but simple and it worked as if a large set. Main props were rolled out with a stationary backdrop and coordinating light schemes, surely enjoyable. With an amazing and spectacular surprise awaiting the end it will make you ask for more and send you home with a satisfied smile on your face. My father, roughly forty years older, accompanied me to this performance and both of us found it quite delightful.