“Wow,” he greets the audience, to much laughter and a few catcalls. Michael Chabon, Pulitzer prize-winning author of The Adventures of Kavalier and Clay and other critically acclaimed work, grins, bespectacled and shaggy-haired but comfortable in his charcoal suit, at the hundreds of welcoming readers that fill Benaroya Hall. 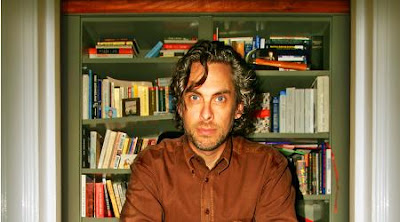 Michael Chabon by merkley??? on flickr
For the next hour and a half, he captivates the audience with lengthy strings of words, melodically lilting sentences and flowing precision. His intelligence is as obvious as his charisma and humor.

Chabon (pronounced SHAY-bon) describes his pre–teenaged self as “bookish, homely, clumsy, bright, friendless, arrogant and self–pitying.” Young Chabon developed an unshakable conviction that he himself was the 20th century reincarnation of Edgar Allen Poe, whom he thought to also contain such qualities. This led to an obsessive worship of Poe and all his written work. He compares his sixth grade bullies to the character of Fortunado from Poe's The Cask of Amontillado. Unable to seek such vengeance as was sought in Amontillado, he retaliates decades later by exposing his grade school bullies. By name.

As an adult, he eschews the idea of reincarnation, claiming it “stinks too sweetly of human wishes.” But Chabon is not completely isolated from the human folly of wishful thinking. He and his wife take sole credit for the feat of Barack Obama’s election in 2008, via the “ripple effect.”

Chabon’s lecture is surely compelling, especially for fans of the author, but young children will find it difficult to stay awake. His words are projected live in large letters on a screen in the bottom corner of the stage for the hard of hearing and to help the audience follow Chabon’s rapid speech.

Question cards are made available to the audience, and a few selected questions are answered by Chabon following the lecture.

Chabon is currently working on a novel set in present day California, where he lives with his wife and four children.