Review of Morgan Thorson/Low: Heaven at On the Boards by Kaya P.

My brother elbowed me in the arm “seriously” he mouthed directing his gaze towards the man onstage in a flowing white skirt. I may have told him we were going to see a live band....with some dancing, but how else was I to coerce my 20 year old brother into accompanying me to a modern dance show? The dancers moved around an almost bare stage. Everything from the floors to the costumes was in shades of white. Two of the dancers who are from the band low; would break away periodically to play the instruments on stage. Even while playing they remained part of the dance. The group came together for choral arrangements that were indeed heavenly! Usually the singing would come forth slowly from silence. 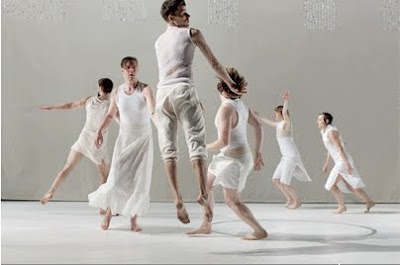 Overall I thought the piece was beautiful and fun to watch. The dancers seemed to bring the notes to life. While watching I thought the tantrums the dancers would break into destroyed the harmony of the piece; until afterwards I was milling about the lobby and, my brother said “there were some parts that were really nice to watch” “really?” I asked “yea” he replied. “I don’t think the point is to LIKE or be COMFORTABLE with all of it” I was surprised to hear this coming from him. He’s right though. There are parts which make you squirm, but who is totally comfortable with the idea of heaven? The concept leaves so many questions unanswered. I guess I can see why the thought of it would make you want to scream. I say this is a must see! Bring someone you normally wouldn’t think to; you might be pleasantly surprised by the perspectives they have to share. 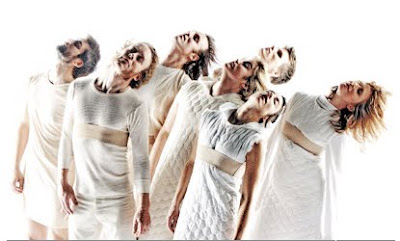 Morgan Thorson/Low: Heaven runs through Sunday at On the Boards. The show has been selling out, but if you want to see it, don't give up! There will be a wait list every night and people on the wait list usually get in. Go! More info at ontheboards.org