Review of Jackie and Me at Seattle Children's Theatre by Jamie K.

Baseball. It’s America’s pastime. It goes with apple pie and the red, white, and blue. There’s also person that goes with that combination: Jackie Robinson. Robinson paved the way for African-Americans in athletics, being the first black athlete in major league baseball. He faced the terrors of being the only non-white player in Major League Baseball, during the 1940s and 50s. He would have to to eat at different restaurants than his teammates, sleep at different hotels, and go out the back door at the stadium while his teammates went out the front. This play, adapted by Steven Dietz from Dan Gutman’s book, Jackie & Me brings everyone into that hard time in the life of Jackie Robinson. 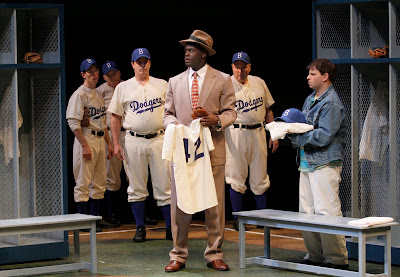 Photo by Chris Bennion
At some plays, you know how you’re fidgeting in your seat? You're doing that because the play isn’t keeping you gripped. This was not a problem at Jackie and Me. Never once was I not enthralled with the story that these actors were portraying.

Erwin E. A. Thomas, who plays Jackie Robinson, plays the part exquisitely. He looks just like any photograph of Robinson--the resemblance is uncanny. Thomas shows compassion, anger, excitement, and everything in between--a winning recipe when playing an icon such as Robinson. I can’t say enough about Thomas’ excellent portrayal of the great man.

Out of the eleven actors that are in the production, only two play just one part, the rest play numerous parts, showing how versatile they all are. Tim Hyland, who mainly plays Branch Rickey, the general manager who brought Robinson to the Brooklyn Dodgers in 1947, was another one of my favorites. When watching the scene when Robinson is getting signed by Rickey, you actually think you are there, back in ’47, watching history being made.

The one drawback to the production is David Goldstein, who plays Joey, the main character of the play. You like him at some moments, and dislike him at other moments. He plays the part of Joey a little too hyper, except for a few moments. At some points, it's almost as if he's drained two cans of Red Bull, and is just buzzing around the stage. 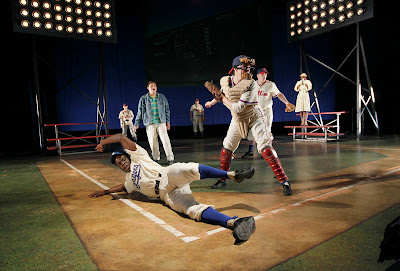 Photo by Chris Bennion
Seattle Children’s Theatre usually does a great job with sets, and this one hits the bullseye yet again. The set is fun just to look at, with the onstage stadium lights, and the dugouts. The play is very humorous throughout--not just the dialog, but also with the physical comedy. One of the funniest moments in the show is when an actor says that she doesn’t serve Yankee fans. There was a ten-second round of applause coming from the audience. This is the kind of show that everybody should go to. It is one the best all-time productions that I have ever seen at Seattle Children’s Theatre.

All around the production is great. From the adaptation by Dietz, to director Shelia Daniels, to the actors. It is utterly fantastic.