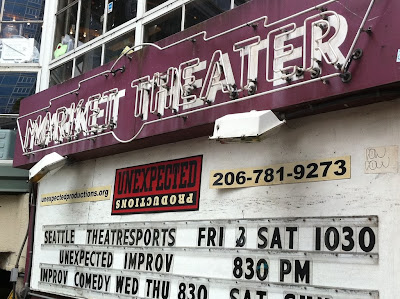 
The improvathon that's going on right now at the Market Theater is definitely a blast. Some of the performers had been going for a full 24 hours when I saw them, and a lot of them are pretty (totally, completely) zonked. As such, the improv that they're doing is a lot looser and freer-form than you usually see at Unexpected Productions. This means that they're willing to fly higher and try weird, crazy stuff, but sometimes in improv stuff does come crashing down to the ground. Such is occasionally the case with these skits. It's a different feel than usual in general, too--the audience and performers are constantly coming in and out, and new faces come to the stage frequently. In a lot of ways, it's like falling into some sort of weird improv dreamspace where very strange things happen and stuff is constantly changing around. And with improv, that can be pretty cool--it leads to sketches entitled "Cats Gone Wild" or "Mega-Death Yawwwrp," or frantic experiences with 20-pound zucchinis. As we all know, things like that should never, ever be missed. Above all though, it's a fundraiser for the Market Theatre, where some of the best and strangest weird stuff in the city arts-wise happens. So it's definitely worth the time and money to come down and kill a few hours seeing what improv, enthusiasm, and extreme exhaustion all team up to create in the final hours of the improvathon.

The 50-Hour Improvathon is over, but you can catch TheatreSports every Friday & Saturday night at the Market Theatre. More info at unexpectedproductions.org.