Review of Evil Dead: The Musical at ArtsWest by Callan C.

When I first walked into ArtsWest’s production of Evil Dead: The Musical, I wasn’t sure what I was getting myself into. Without having seen the Evil Dead movies, I knew little of the storyline or characters. ArtsWest had billed the show as being “one of the craziest theatrical experiences of all time,” so I had somewhat high expectations of the show’s quality. What I saw that evening, however, did not quite meet those expectations. 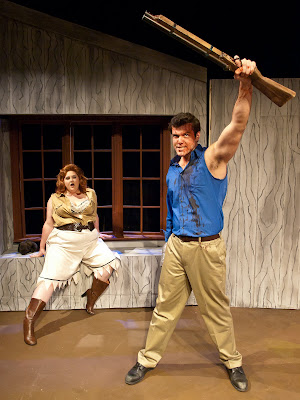 Kate Jaeger and James Padilla. Photo by Michael Brunk.
The story begins with five young people driving out to an abandoned cabin for the weekend. Their leader is Ash, a housewares employee from “S-Mart.” Also in the group are his girlfriend and coworker Linda, his troublemaking friend Scott, his uptight sister Cheryl, and Scott’s ditzy date Shelly. Their weekend in the woods quickly turns sour, however, when they unleash an evil spirit upon the cabin. As his friends are turned to zombies, it’s up to Ash to save the day with a shotgun and chainsaw at his side.

With all of this mayhem set to music, it does turn into a pretty bizarre show. The actors are all excellent vocalists, and the live band certainly adds to such musical numbers as “Look Who’s Evil Now,” “All the Men in My Life Keep Getting Killed by Candarian Demons,” and “Do the Necronomicon.” The dance routines, however, do leave something to be desired. And even the enjoyable music doesn’t make up for a somewhat disjointed, hard-to-follow plot. As someone who does not know the movies, I found it hard to keep up at times. The story is supposed to include aspects of all three Evil Dead films, though from what I hear, Evil Dead: The Musical focuses primarily on the second of these films.

Basically, Evil Dead: The Musical is supposed to be a parody of its namesake movies and of the entire horror film genre. While there are plenty of well-timed jokes throughout the play, the excessive use of profanity and innuendo make it seem as though the script is trying too hard to be funny. In contrast, the use of fake blood and gore is somewhat underwhelming. ArtsWest warned of “graphic comedic scenes with lots and lots and lots of blood” and even handed out ponchos to audience members in the front row, yet there was only one time in the show that really lived up to such hype.

Though it’s true that the show has its flaws, the music, the acting, and many of the jokes are still enjoyable. My high expectations were not quite met, yet I did have a good time, and I know that the rest of the audience did, too. For fans of Evil Dead and other cheesy horror movies, Evil Dead: The Musical is definitely entertaining. For everyone else, just don’t set your hopes too high.

Evil Dead: The Musical
ArtsWest
Through November 20th
NOTE: Contains adult language and themes, and graphic comedic scenes with lots and lots and lots of blood. Recommended for ages 16 and older.

Going to ArtsWest for the first time? Write us a note about it, and you might win a fabulous prize pack including tons of tickets and memberships to local arts venues. It's the Teen Tix (he)ARTSCrush Adventure Quest! All you have to do is go to this form, write a note (150 words or less) about your experience at a new-to-you arts venue, and hit "Submit." Boom. You're entered to win. Do it over and over and over again and you might get crowned Seattle's Bravest Young Arts-Goer TM. More details here. Good luck!