Review of Opus at Seattle Repertory Theatre by Lauren W.

The first sound in Michael Hollinger’s play, Opus, is the sound of strings tuning—a preparatory, evocative sound, a sound that readies an audience for a relaxing evening at the orchestra. And part of that is true. Opus is a musical work indeed. The set includes mere music stands, chairs, and wood backdrops embossed with music. The play takes poetic interludes for its characters to rhapsodize about music together in separate spotlights, speaking a monologue in four parts as if it were a piece they were playing. The play is full of these lyrical moments, where realism is suspended for an underscore. 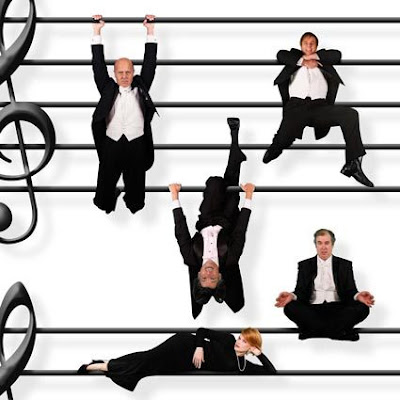 But that’s only part of it. The lyrical gives way to the colloquial. At the end of a beautiful piece of music, we see the quartet explode in quarrels and nitpicking that the audience never gets to see during their night at the philharmonic. It’s an interesting take, and one that any artist will identify. That painting, that dance routine, that scene may seem moving and effortless. But the audience doesn’t see the dark underbelly, the hours of frustration and ugliness that go into creating something lasting and beautiful. I commend Hollinger for taking on such an intriguing and untapped subject for his play.

The plot is centered around a string quartet full of interesting characters. They have recently lost a member, and the play commences when they hire a woman replacement for him. But the former member’s genius presence hangs over the characters like a ghost, and the play goes on to show how interpersonal dynamics can affect the art that a group can create.

The play lacks a protagonist, and this might prove troubling to some. Hollinger likely intended the quartet itself to be the protagonist; the audience does not root for particular players but for the group’s welfare as a whole. This ploy might have come off better if the group seemed more cohesive. The group seemed to take a while to gain its footing, as if the actors were warming up like they would with an instrument. Each individual actor portrayed his or her character well—especially Allen Fitzpatrick, who was able to infuse energy and believability into the over-the-top Elliot.

The events of the play are the stuff of real life: awkward silences, broken relationships, bickering, small personal tragedies. Don’t go to Opus if you’re looking to get caught up in a great human drama. It’s there, but that’s not what the show is about. It’s about music. It’s about how messy, petty humans can come together to make something great, and how little audiences tend to think of that when they go to see a show. Even though the play’s Elliot is an antagonist, all he wants to do is to “create an opus: something worthy of posterity.” Opus is a fascinating exploration of everyday artists.