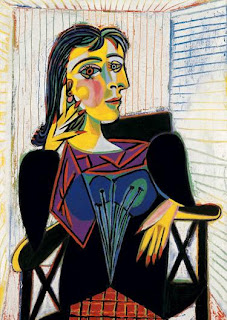 As I have already reviewed the Picasso exhibit before, I felt I had seen everything there, and that nothing was going to be different. I was wrong. Now, I didn’t go on the press tour because I couldn’t find it. I went on a My Fave Things tour instead. This tour happens every Friday @ 6:30pm, and this week it was about, what else, Picasso. I really liked the fact that this time the tour was led by art students from the UW, and they seemed to know quite a lot about what they were saying. There was a moment when I had to bite my tongue because one of the art students made a statement that I believe is incorrect about Picasso’s love life, and since I was not leading the tour, I decided not to say anything.

I still haven’t decided which piece of Picasso’s is my fave. Well, all that means is another trip to SAM. Yay! Typically when I am at SAM, I’m volunteering, so I normally don’t get to be as spontaneously creative as I was Friday night. I wish everyday was this much fun! I colored a paper mask! I made a button! I modeled, and had my portrait drawn by a wonderful young artist (so happy)! I played theatre games, including a marathon version of “Story! Story! DIE!” which began as a story about a psycho who lived in a hut on a rock, then it spun very sci-fi all of a sudden, then went sorta’ all freaky and sideways on me. So much fun!

I had a glorious time experiencing Picasso in a totally different way. He has the best diary in town. 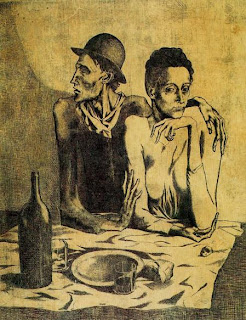 Open the doors and they will come. As did many teens for this night of fun and education, free of charge. Not only was a gallery of great works open to us but a contagious atmosphere of singing, dancing and art filled SAM.

After you've walked up the stairs from the 1st and Union entrance you feel the energy of the young and talented performers belting out a tune from the stage. People having their photos taken by a pro in front of a large orange back drop. Walk over and see a space crawling with teens on the floor and spilling off the drawing table practicing cubism and other art.

My favorite piece of the Picasso’s collection is "Frugal Repast". Depicting a blind man and far seeing woman. A deep-seated portrayal of poverty. I had a wonderful time and hope to return to TNO on May 13th for Nick Cave: Meet Me at the Center of the Earth. 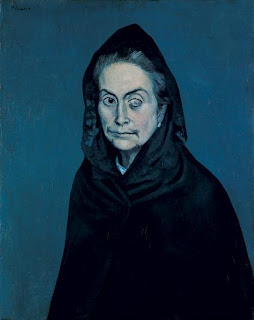 Math equations doodled into the margins, splats of tea and grizzly edges have graced the early canvases of Picasso’s unsold early work, but never before have they been shown in such a refreshing and honest way. The Seattle Art Museum’s Picasso exhibit, drawn from the Musée National Picasso in Paris, chronologically presents many of Picasso’s unsold paintings from his early life in Paris to his death. These paintings were truly for Picasso and not for the public, and so the organic natures of each piece have not been inhibited. The 10 months which the SAM spent preparing for this exhibit are seen in every choice of frame, and every position of the pieces. The imperfections on the canvases are not hidden, but thrust into the limelight; sketches are lined up in the middle of several rooms, with the giant paintings taking a back seat.

Thursday January 6, student/youth tickets are $8 all day (10 AM - midnight)

For more information about this exhibit, including a full calendar of special events, visit picassoinseattle.org.