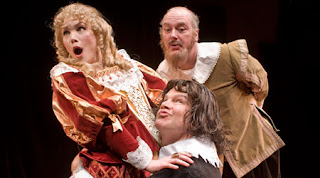 Photo by Erik Stuhaug
So, Tartuffe is a con-man. He fakes religious piety in order to worm his way into the lives a wealthy family and seduce the lady of the house, and hilarity ensues. Tartuffe opened at Versailles in 1664, and was almost immediately censored by King Louis XIV. King Louis LOVED the play, actually. Thought it was hilarious. But he was worried that his subjects wouldn't get the joke. He thought that there was so much "resemblance of vice to virtue" in the play that people wouldn't be able to sort out which was which. This is hard to understand from a modern perspective, until you realize that Molière basically invented comic juxtaposition, a concept so central to contemporary comedy, we barely even notice it anymore. He figured out that putting two things together that don't usually go together = funny. He said "incongruity is the heart of the comic . . . it follows that all lying, disguise, cheating, dissimulation, all outward show different from the reality, all contradiction in fact between actions that proceed from a single source, all this is in essence comic."