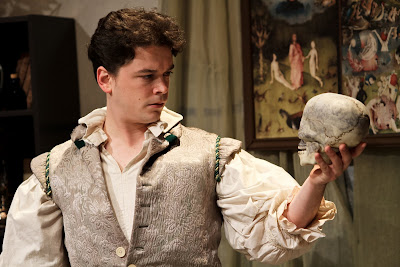 Photo by John Ulman
It is a well-known fact that everybody LOOOOOOVES Connor Toms. If Seattle theatre has such a thing as a teen heartthrob, he's it. And not to toot our own horn too loudly, but we figured this out, like, a million years ago. Okay, three years ago, when we did this interview with Connor when he was playing Hamlet at Seattle Children's Theatre. Since then, our reviewers have adored him in Two Gentlemen of Verona at Seattle Shakespeare Company, The Diary of Anne Frank at Intiman Theatre, and, most recently, as the hero Homer Wells in the epic two-part drama The Cider House Rules, for which he gave us this charming interview.

Connor is tackling Hamlet again, but this time it's in Wittenberg, a modern comedy about Hamlet's craaazy college days. The balance of the cast is also excellent (the gorgeous and funny Michelle Chiachiere is pretty crush-worthy herself) and we have every reason to expect Wittenberg to make us swoon.