"Equivocation is a stunningly thoughtful play. It boldly holds its audience accountable for its response. It stands and says: Listen up. Art matters, because life matters...Cain’s provocative script, performed by Ashland’s riveting actors, makes for one night at the theatre you are not permitted to forget." - Teen Tix reviewer Lauren W 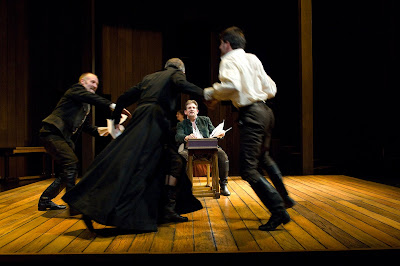 In Equivocation, the Prime Minister to King James commissions William Shakespeare to write a play about a thwarted attempt to kill the king. But when Will and his band of actors discover the government’s version is neither true nor interesting, they must choose between losing their artistic integrity or losing their heads. Bill Cain’s contemporary writing is brilliantly woven with threads of King Lear and Macbeth. This production was a smash hit at the Oregon Shakespeare Festival, and this marks the first time in 25 years that an OSF show will be seen in Seattle.

"...this is a thrilling night of theater and you should treat yourself to catching this incredible show before it moves on. And that is the truth." - BroadwayWorld.com