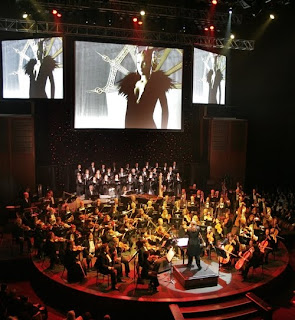 We sent a member of our Teen Press Corps, Fanny L., to interview composer/conductor Andy Brick about PLAY! A Video Game Symphony, which plays tonight and tomorrow at Seattle Symphony. Here's what she had to say about it:

Whether you are a video game enthusiast or haven't touched a console before in your life, PLAY! A Video Game Symphony is definitely an event to check out. Symphonic arrangements of video game music will be played alongside corresponding videos and graphics to make the experience all the more complete; the inspiring venue of Benaroya Hall combined with the technical prowess of the performers will breathe new life into this performance. Principal conductor and music conductor Andy Brick said in his interview with me that while PLAY! certainly attracts those who are interested in video games, there are always a good number of people who come out of curiosity. "You hear so much about video games in the mass media; this leads to performances like PLAY! attracting people who've never played video games before." He hopes to expose people to the classical concert experience through such relevant media as video games, and pique their interest in future events by doing so. Newcomers should expect to be pleasantly surprised by the refreshing combination of classic, symphonic music and modern technology; however, previous attendees need not fret as Andy promises there will be some exciting and brand new pieces for you guys as well.