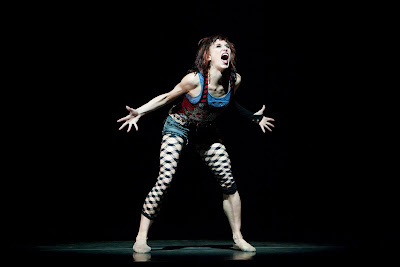 
If PNB’s All Tharp is any indication, Twyla Tharp is clearly a woman with a lot to say. You sit down in the theatre, the curtain goes up, and All Tharp proceeds to grab you and shake you around in every direction. Until last night, I had never seen ballet danced as though drunk, groups of dancers swooping across the stage dressed as synchronized swimmers, or dancers mouthing words that definitely cannot be written on this blog, screaming silently at a captivated audience. Tharp’s work is a creature truly and markedly set apart from any other. It is a blend of the traditional, of the movie and the theatre, of the hidden story and dance for the sake of dance. 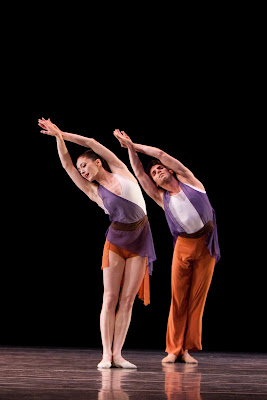 
Multiple times during All Tharp, all of these forces would converge at once to astounding effect. At one point during Waterbaby Bagatelles, my jaw dropped a little and I found myself saying “wowwwwww,” (with that exact number of w’s). I looked at my friend, and she gave me a look which told me she had just had the same experience. Then, in a priceless moment, the theatre seemed to collectively realize that everyone present had just had their minds blown away, and that we were certainly not in Kansas anymore.

Much of Tharp’s wow factor is derived from her experience choreographing for movies. In Afternoon Ball and Waterbaby Bagatelles, she uses the musical score to amazing effect. For Tharp, the score is not just a soundtrack to keep our ears occupied or set the mood. Instead, the music and choreography become flawlessly aligned and intertwined. She exploits musical crescendos by timing them with elaborate tableaux, each soaring in time with the other. Armed with both sound and visuals, Tharp truly packs a powerful punch. 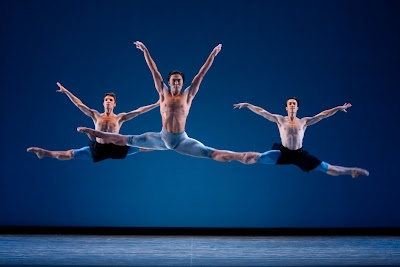 
TeenTixers will particularly enjoy Afternoon Ball, a piece that draws you in with its brooding mood and opportunity for interpretation. Dancers switch seamlessly between angsty, agitated movements in which they are thrown about like rag dolls and effortless grace, leaping about elegantly. It seems to understand the weirdness of being young perfectly, and really rescues the show after the opening act of Opus 111. No matter how hard I tried, I could not manage to like Opus very much: the piece just lacks a soul. Each individual movement seems exquisite, but as a cohesive statement it drags on and fails to be much more than pretty to look at. Waterbaby Bagatelles is essentially the polar opposite. When the bars of fluorescent lights descend and transform the stage into an enormous aquarium, you know you are going to be impressed, and you are.

All Tharp refuses to be pinned down. It reaches in many directions and pushes boundaries in ways that are sometimes awkward but more often just plain awesome. Theatrical and spectacular, it will not easily be forgotten.