Review of A Lie of the Mind @ ACT's Central Heating Lab by Olivia M.

In my 17 years on this planet, I never expected to see a grown man wrapped in an American flag shaving his face wearing only boxers, nor a brain damaged woman exclaim with utter conviction, “I am a shirt man”. In A Lie of the Mind I witnessed both. 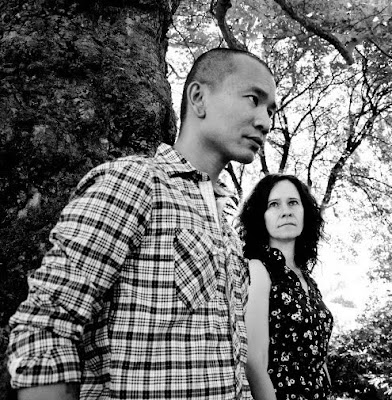 Ray Tagavilla and Aimée Bruneau in A Lie of the Mind
The play is indeed about three hours long, but at no point did I ever want to leave and go home, regardless of the homework I still had left to do. This is the story of two families who must deal with two sides of the trauma of domestic abuse when one family’s son, Jake, beats his wife, Beth, to the point of having lasting brain damage. Even though he is the antagonist, I found myself identifying with Jake, played by Ray Tagavilla, because of his very evident struggle with the guilt he feels from what he has done. No, I have not personally given someone brain damage, but I cannot help but feel empathy for someone who wants to repent for his wrongdoings against Beth, played by Aimeé Bruneau, as he does. Although the two share only the final scene, they have a wonderful report throughout the whole play as they go through kindred stages of recovery and enlightenment. Jake recovers from insanity brought on by what he thinks is the loss of his wife, and meanwhile Beth physically heals from horrible brain injuries.

With two intermissions, I found myself guessing at what was going to happen next, but my speculations were wrong each time. This was not due to any incoherent plot, but because the play was an emotional ride, pleasantly surprising (or confusing) at every turn. The most surprising twist for me was when Beth’s brain damage causes her to forget her husband, and instead fall in love with her husband’s brother, Frankie (played by Tim Gouran), who is stuck in Beth’s house with a bullet wound in his leg (Yes confusing, but also rewarding).

A quote that struck me during the play (and is conveniently located on the playbill) illustrates how this play made me feel: “There’s this thing in my head. This thing that the next moment, the moment right after this one will... blow up. Explode with a voice.” The third act ferociously builds to a thought-provoking cliffhanger that lingered until I fell asleep that night. In summation: the cast suffers no weak links; the stage is visually unique with spotlights separating the stage into two areas of focus; and a live musician plays banjo and guitar to perfectly accent the whole show. This all adds up to a night I would be more than happy to repeat.