The concept of writing a play about Rock and Roll carries with it the potential for enormous success as well as for disaster. It’s an ambitious idea and I was glad that it turned out to be the former. If you are not familiar with classic Rock and Roll bands or the social and political climate in Europe during the 1960s through to the 1990s, you may want to do some research before you attend Tom Stoppard’s Rock 'n' Roll. This is not because the play revolves around some obscure event only a select audience will understand, but because understanding the time period and music will help the viewer fully appreciate the humor and intellectuality of this play. 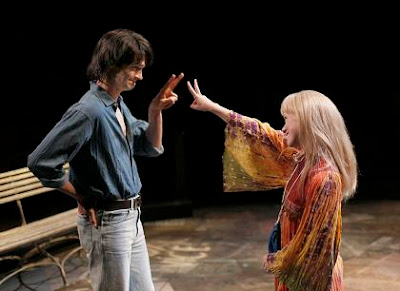 The story begins in 1968, with a young man named Jan who plans to return to Prague to see his mother and his home country, which has fallen under Communist rule. The play proceeds to follow the events of post-World War II Europe through the perspectives of Jan and his friends in Britain. The play features clever humor interspersed with social, political and philosophical commentary, all supplemented by some of the all-time greatest rock songs by classic groups from the time period. Although the story is somewhat compelling, partly because the viewer knows of the historical events that will take place before they happen, it is really the characters and their interactions that drive the play. Unlike many stories with a hero leading the plot and lots of flat, supporting characters, in Rock 'n' Roll, every single character had a distinct personality and a role to play, from Jan’s former professor Max, to Max’s wife Eleanor, to their daughter Esme, and so on. And it is these varying personalities that allow for the profound discussions of politics and philosophy that make the play such a phenomenal work of art.

Plot elements aside, the presentation of the play far exceeded any expectations I had. While most plays throw in one or two gimmicks with the props, and a few overuse them, Rock 'n' Roll was both creative and effective in its use of props. Just when I thought they couldn’t possibly throw anything more at me, I found out why there were balloons among the lights and why a bookshelf is floating near the ceiling. I could write pages on the use of props, but suffice it to say you will never quite know what to expect. And neither are the props distracting. They serve exactly their intended purpose and nothing more.

Whether you’re looking for some good musical theater, or to be taken back to the good old days, or simply for a way to spend your weekend night, I would recommend checking out Rock 'n' Roll. It’s a powerful and unforgettable experience that you’ll be talking about for days after.